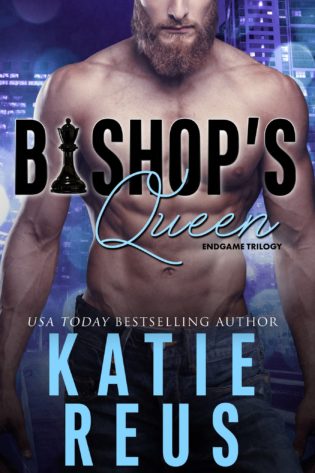 Return to the Endgame trilogy where blood is thick, but passion is thicker…
He doesn’t believe in fairy-tale endings…
They used to call Evan Bishop the golden boy. He had it all and was about to close the business deal of a lifetime, then marry the woman of his dreams. But everything goes to hell when a faceless enemy wants to destroy his family’s empire and see him dead. Except the bomb meant to kill him fails. He wakes up from a coma to find his face scarred and his brother missing and wanted for murder. Now that he’s damaged, he hides away from the world—including the woman he loves. He refuses to be a burden to her, so even though it destroys him, he sets her free.
She’s about to prove him wrong…
Isla MacDonald isn’t walking away from Evan just because he’s decided to shut her out of his life. He blames himself for the bombing that got her father killed and nearly killed him—but he’s wrong. After all attempts to see him fail, with a broken heart she tries to resume her life and take over her father’s firm. Though it’s not her dream, she wants to honor his legacy. But when someone tries to kill her—twice—she needs a bodyguard. To her surprise Evan steps up and insists on protecting her, putting on a show as the caring fiancé. But he won’t let her back into his life or into his heart. To have any chance at a future together, they’ll have to resurrect the past and stay alive long enough to expose the man determined to see them both dead.
Author note: This book can be read as a stand-alone, complete with HEA.
Books in trilogy: Bishop’s Knight, #1 Bishop’s Queen, #2 Bishop’s Endgame, #3

Bishop’s queen is about Evan and Isla, the two people who were in love before the tragedy happened in the book 1 of the series, leaving Evan with physical and mental scars and him pushing away from everyone, including breaking off his engagement with Isla. Now with Isla in danger, Evan can’t help but stay close to her.

I quite enjoyed the book, though I do wish I had read the first book in the series, it would have made my connection to Evan and Isla stronger and would have given me an insight of how they were before the event. Regardless of that, I liked Evan and Isla together, though they Evan had broken off their engagement, it was very much obvious of how much they both still loved each other and Isla couldn’t care less about his scars. I also enjoyed the romantic suspense element to the book, it was done well to keep me interested in who might be the culprit.

Quibbles:I do wish however that we had gotten a bit more of the romance between Evan and Isla, since the suspense part of the book takes it away from romance a bit, I guess if the book had been longer it wouldn’t be an issue.

Overall, I enjoyed Bishop’s Queen, it had been sometime since I read a romantic suspense by Katie Reus and it reminded me why I enjoy her writing and her characters, they are just very easy to connect to and get lost in. I’m looking forward to reading the book in the series!

He leaned down, not sure what the hell he was going to do to cut her off. Kiss her? God, what was he thinking? He started to pull back, then she grabbed him by the front of his shirt and yanked him down to her.

Her green eyes flashed in anger—and hunger—as her lips collided with his. What was she doing? What was he doing? He should pull away, but he couldn’t. Instead, he threaded his fingers through her thick auburn hair, cupping the back of her head as she plastered herself to him.

He loved the sweet taste of her, had missed her for far too long. Every morning he woke up, expecting to roll over and see her, but his bed was always empty. And cold. He’d ached for her in that hospital room, even as he was the one who’d kept her out. And he’d continued to ache for her once he’d been discharged. He simply couldn’t stop wanting her.

Without breaking the kiss, he reached behind himself and held his hand to the scanner. A second later, the door opened with a soft snick and then they were inside his place.

Though it wasn’t really his place, but a sparsely furnished rental with the basics and a killer view.

He wasn’t sure what they were doing, not really. He wanted to be friends with her, wanted her in his life, but he didn’t want to saddle her with him. And he really didn’t want her to have any regrets. “We should stop,” he rasped out, surprised he was able to talk at all as he pulled back, his breaths coming in hard and shallow.

She slid off his jacket and tossed it to the ground. “Should we?” Her tone was tart as she stared up at him almost defiantly.

Dammit. He couldn’t remember why they should stop as he looked into her bright eyes. He wanted her so much, had never stopped wanting her, loving her.