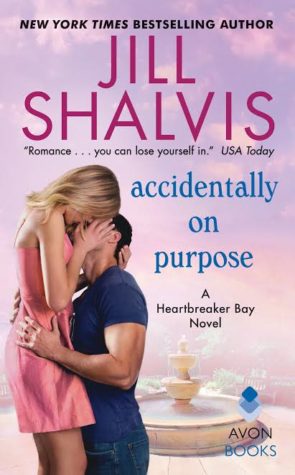 There’s no such thing as a little in love…
Elle Wheaten’s priorities: friends, career, and kick-ass shoes. Then there’s the muscular wall of stubbornness that’s security expert Archer Hunt—who comes before everything else. No point in telling Mr. “Feels-Free Zone” that, though. Elle will just see other men until she gets over Archer . . . which should only take a lifetime . . .
There’s no such thing as a little in lust…
Archer’s wanted the best for Elle ever since he sacrificed his law-enforcement career to save her. But now that she’s earned happiness and success, Archer just wants Elle 24/7. Their chemistry could start the next San Francisco Earthquake, and Archer doesn’t want to be responsible for the damage. The alternative? Watch her go out with guys who aren’t him . . .
There is such a thing as…
As far as Archer’s concerned, nobody is good enough for Elle. But when he sets out to prove it by sabotaging her dates, she gets mad—and things get hot as hell. Now Archer has a new mission: prove to Elle that her perfect man has been here all along…

“Hey, honey,” Trudy said in her been-smoking-for-three-decades voice. “Need anything?”“Nope, I’m good.” Good plus mad, but although she adored Trudy, the woman couldn’t keep a secret to save her life. “Just taking in the nice morning.”“Oh, that’s a disappointment,” Trudy said. “I thought maybe you were looking for that hottie with the nice package, the one who runs the investigation firm down the hall.”Elle nearly choked on her tea. “Nice package?”“Well I’m old, not dead.” And with a wink, Trudy pushed her cart down the hall.It was true that Archer was annoyingly hot, not that she cared. Hot was useless to her. She’d much rather have the things that had eluded her for most of her life—safety, security…stability.

Three things Archer had never been accused of.

At the other end of the hall, she stopped in front of the door with a discreet sign: HUNT INVESTIGATIONS.

The investigative and elite security firm was carried on Archer’s reputation alone, no ads or marketing required. Basically Archer and the men he employed were finders and fixers, independent contractors for hire, and not necessarily tied by the same red tape as the law.

Which worked for Archer. Rules had never been his thing.

She opened the door and let herself into the reception area, which was much bigger than hers. Clean, masculine lines. Large furniture. Wide open space. A glass partition separated the front from the inner offices.

The check-in counter was empty. The receptionist wasn’t in yet—it was too early for Mollie. But not for the other employees. Past the glass Elle could see part of the inner office. A group of men, five of them, entered by a private door. They’d clearly just come back from some sort of job that had required them to be locked and loaded since they currently looked like a SWAT team.

Elle literally stopped short. And if she was being honest, her heart stopped too because sweet baby Jesus. The lot of them stood there stripping off weapons and shirts so that all she could see was a mass of mind-blowing bodies, sweaty and tatted and in all varieties of skin colors.

It was a cornucopia of smutty goodness and she couldn’t tear her eyes away. In fact, she couldn’t speak either, mostly because her tongue had hit the floor. Her feet took advantage of her frozen brain, taking her to the interior door, where she wanted to press her face up against the glass.

Luckily, someone buzzed her in before she could. They all knew her. After all, her job required her to work closely with the security firm, and therein lay her deepest, darkest problem.

Working closely with Archer Hunt was dangerous in oh so many, many ways, not the least of which was their history, something she did her best to never think about.

She was greeted with variations on “Hey, Elle” and “Mornin’” and then they all went their separate ways, leaving her alone with their fearless leader.

Pre-order ACCIDENTALLY ON PURPOSE and FILL OUT THIS FORM and enter to receive an exclusive bonus scene from her Heartbreaker Bay series!