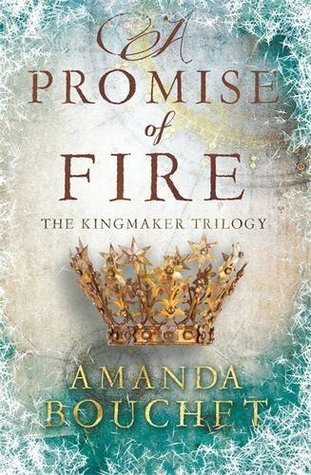 Catalia "Cat" Fisa is a powerful clairvoyant known as the Kingmaker. This smart-mouthed soothsayer has no interest in her powers and would much rather fly under the radar, far from the clutches of her homicidal mother. But when an ambitious warlord captures her, she may not have a choice…
Griffin is intent on bringing peace to his newly conquered realm in the magic-deprived south. When he discovers Cat is the Kingmaker, he abducts her. But Cat will do everything in her power to avoid her dangerous destiny and battle her captor at every turn. Although up for the battle, Griffin would prefer for Cat to help his people willingly, and he's ready to do whatever it takes to coax her…even if that means falling in love with her.

Catalia “Cat” Fisa, is a kingmaker. Disguising herself as a clairvoyant in circus to hide her identity from her family. In the last 8 years after escaping the horror show that was her family, she has managed to make a place for herself flying under radar at the circus. She finally has friends and people she cares about. Keeping her true self and her powers hidden takes a lot but since a prophecy that says destruction for all and a mother that is bent on capturing her. All of which changes when a certain warlord shows up.

Griffen “Beta Sinta” a warlord has been spying on Cat for sometime now, he is fascinated by her. Searching for magoi to help him with his sister’s rule, when he finds Cat. Realising that she’s the one, the one he dreamt about Griffen is willing to do anything to get her come with him and his ‘Beta Team’ to return to Sinta.

Of course nothing is so easy Cat wants to live her life hiding from her psychotic family especially her powerful mother while Griffen has to kidnap the woman who seems the answer to all of his questions. Doesn’t help that Cat hates him *really* she does, she doesn’t find him attractive at all *sure Cat* and Griffen is determined to find out who she is and wants her intensely.

I really loved Cat! Her childhood had forced to become stronger not only physically but mentally and emotionally as well but she retained her sense of right and wrong along with kindness. Griffen was also very interesting, I’d like to know his reasoning behind some of his actions. Griffen’s family is very different to other royals in this setting, they actually care for another. I really liked his family and I hope we get to learn more about them. Griffen was very protective of Cat which was also lovely to see even though she was a lot more powerful than probably anyone in the realm.

Cat and Griffen have a very interesting relationship, Cat sees him as her enemy from the moment he kidnaps her while Griffen is just trying to keep her with him. Their banter as well as the scenes where Cat is really trying to not be attracted or soften towards Griffen and his team were hilarious. You get slowly see them falling all the while Cat is professing she doesn’t like him at all reallly.

The world building was while pretty great, I would have liked a bit more background because it wasn’t exactly explained more along the lines of this is it which happens sometimes with first books in a series. I’m really interested to know about the kingmaker world since it has dragons, magic, bloodthirsty parents and powerful deities and the humans they converse with so what’s not to love.

Quibbles: View Spoiler »I’m not a huge fan of first person in general so it took a while to get used to that and I wish we could have gotten Griffen’s POV which would have made this a even better read which it already was. Also how many close deaths can a person come to, by the time the book finished there were numerous attempts to her life and she was close to death at four times. « Hide Spoiler

I’m saying this as a person who hates reading same couple series because I get bored but I really want to see more of Cat and Griffen. Cat and Griffen were amazing together and Cat is a badass! The book is intense ride from start to finish with magic, a heroine that is amazing, a enemy to love trope (my fav) and a very intriguing plot!

Overall a great new start to what seems like an amazing series and an engrossing read. I can’t wait for the next book!