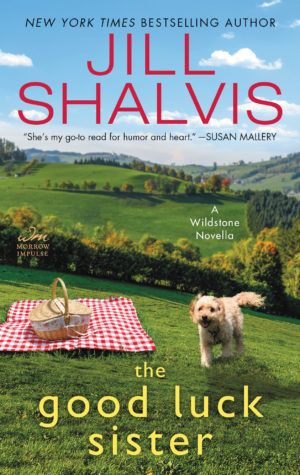 The Good Luck Sister by Jill Shalvis
Series: Wildstone #1.5
Published by Avon on 1st May 2018
Genres: Contemporary Romance
Source: the publisher
Buy on Amazon US, Buy on Amazon UK, Buy on Kobo, Buy on itunes, Buy on B&N

This summer, romance blooms again in Wildstone!
After a difficult few years, Tilly Adams is ready for life to start going right. Though she has a case of first day nerves teaching art at the local community college, she knows it isn't anything a few snuggles from her rescue puppy won't cure. Until she sees Dylan Scott again, her one-time BFF and first love sitting in the front row.
Dylan knows he should've left well enough alone, but when he sees Tilly living her dream, he can't help but make contact. Ten years ago, he left Wildstone and everything in it behind, including Tilly. He had his reasons, but now he wants her back in his life, anyway he can get her.
When Tilly agrees to design the logo for Dylan's new helicopter touring company, it's business only...until she finds herself falling into his arms once again. Can she possibly open her heart back up to the only man who's ever broken it? But soon they're both realizing the truth - love always deserves a second chance.

Tilly and Dylan were high school sweethearts, Tilly dreamt that her and Dylan would be together forever, after all they were in love and would achieve their dreams together of being a famous artist (Tilly) and an astronaut (Dylan). But things go awry, Dylan breaks her heart and leaves without telling her. For the next 8 years they go on their lives without Tilly hearing anything from him. This of course changes when one morning she finds Dylan in her art class.

I loved Tilly and Dylan, they both had been through some very tough times but had made it by themselves and neither had really forgotten each other. We also got to see how they were when they were together in their teenage years and it added a little bit more to their story. I also liked the names of chapter titles, they were very relatable….

I really do love Jill Shalvis books and her novella’s are no exception, she does a remarkable job at making the characters three dimensional and give the plot sustenance in very limited word count so with that mind I’ll say I did love the characters and the plot but it seemed like it went to fast especially the ending…I wish the that author maybe placed a epilogue months ahead instead of what happens at the end chapter..because of how Tilly had felt not few hours ago made it seem like it was a bit too sudden to me…

“I’ve finished my free trial of adulthood and am no longer interested, so please cancel my subscription.” From The Mixed Up Files of Tilly’s journal.

Tilly Adams sat in the vet’s office staring at the doctor in shock. “Say that again?”

Tilly looked down at Leo. “You do know he’s a dog, right?”

All six pounds of him smiled up at her. About a month ago, she found him on a street corner hiding beneath a bus bench; wet, dirty, cold, hungry and matted. He’d been Dobby meets Gremlin meets neglected, abused Care Bear. Tilly had looked around for an adult, and then had to remind herself that at twenty-five years old, she was legal herself. So then she’d searched for an adultier adult, but she’d been the only one in sight.

So she’d scooped the little guy up and had brought him to the SPCA, who’d said he was about five weeks old, a possible Maltipoo, which meant he came by his care bear look naturally. He was malnutritioned and suffering from mange. They’d said they’d do what they could, and Tilly had turned to go. That had been when she’d seen all the eyes on her from an endless row of cages … and she’d realized her care bear would soon be sitting in one too. Then she’d heard herself offer to foster him until they found him a forever home.

They’d found him one too. Tilly had signed the adoption papers last weekend in spite of the fact that just that morning he’d escaped his crate, eaten her favorite sneakers, destroyed her favorite pillow, and then yakked up the stuffing from the pillow.

He was a destructo of the highest magnitude, and something else too. He had no idea how small he was. He went after her sister Quinn’s twenty-plus pound cat and her neighbor’s hundred pound black lab with the same fierce, fearless gusto. Turned out, the little guy had a bad case of small-man syndrome, which was how he’d earned his name.

And now on top of Leo’s impressive chewing skills, his escape artist skills, and his ability to get up on her bed and yet still not understand why stepping in his own poop was annoying, he had a new skill.

Proud of himself, Leo smiled up at her. Smiled. An hour ago he’d been coughing and limping and acting all sorts of odd. Now he just kept smiling up at her while sending her meaningful glances at the open dog biscuit bin between her and the doctor.

Dr. Lyons laughed and gave him one.

“Dogs can’t fake sick,” Tilly said while Leo inhaled the biscuit whole before licking the floor to make sure he got all the crumbs. “Can they?”

Dr. Lyons scooped him up and gave him a kiss on his adorable snout. “Yours did.”
Tilly sighed. It was too early for this. She’d had a crazy late night. Not hanging at Whiskey River, the local bar and grill. Not at a club with friends. Not working on her designs for he upcoming graphic art showing.

Nope, she’d been on a serious stress bender — a marathon of Game Of Thrones. She hadn’t fallen asleep until after two and her alarm had interrupted her in the middle of a really great dream starring Jon Snow.

Dr. Lyons handed Leo over. He immediately snuggled into the crook of Tilly’s neck and dammit, her cold heart melted on the spot and she hugged him close. “You’re sure he’s okay? He was coughing. And then he limped funny. And then he wouldn’t eat.”

“But he hasn’t coughed once that I’ve seen. And he’s not limping either. And you said all his food vanished while you took a quick shower.”

Dr. Lyons waited for her to catch up.

Tilly sighed. “He really did fake me out.”