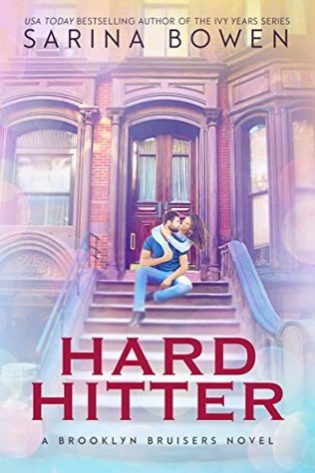 He's a scrapper in the rink, but he's about to learn that playing nice can help you score...

As team captain and enforcer, Patrick O’Doul puts the bruise in the Brooklyn Bruisers. But after years of fighting, O’Doul is feeling the burn, both physically and mentally. He hides his pain from the coaching staff, but when his chronic muscle strain becomes too obvious to ignore, he’s sent for treatment with the team’s massage therapist.

After breaking up with her long-term boyfriend, Ari Bettini needs a timeout from men. She’s focusing only on work: rehabilitating the Bruisers’ MVP. O’Doul is easy on the eyes but his reaction to her touch is ice cold. Ari is determined to help O’Doul heal, but as the tension between them starts to simmer, they both learn that a little TLC does the body good…

Hard Hitter by Sarina Bowen is about the grumpy Hockey Captain of the Brooklyn Bruisers, Patrick, we met in the last book and the yoga teacher/message therapist of the team, Arianna.

Patrick had a pretty difficult childhood and hence prefers his solitude. He also doesn’t like people touching him which is understandable and so are the reasons why he doesn’t get too close to anyone. Ari, on the other hand has just gotten out of a long term relationship and isn’t looking to get involved.  They are very different from each other, she’s tactile, he really loathes touching. She’s very social but he isn’t, you get the idea…Now that they are both spending a lot more together since Patrick has to see almost everyday for his rehabilitation, things are getting complicated.

The book has a slow build up as we get to know the characters more and seeing their relationship develop. They are both attracted to each other but have their reasons for hesitating. They aren’t sure of what to do with these feelings that they have….They were so adorable together, especially Patrick *swoony sigh* I really loved his character. Ari has a lot of baggage from her last relationship and is very reluctant to get involved with anyone so it takes Patricks patience and love for her to finally lower her walls.

Quibbles: View Spoiler »I don’t why but I felt like the whole drug issue could have been handled a lot better. « Hide Spoiler

Overall I enjoyed it, Sarina Bowen is a great writer, you get sucked in with how she writes the characters and the plot and her couples are pretty easy to like.

I hope Sarina Bowen decides to give Nate his own story because he is so interesting, I loved seeing him in the book! Him and Becca are both very fascinating characters. Next up is Mikes book Pipe Dreams, Out May 2017!