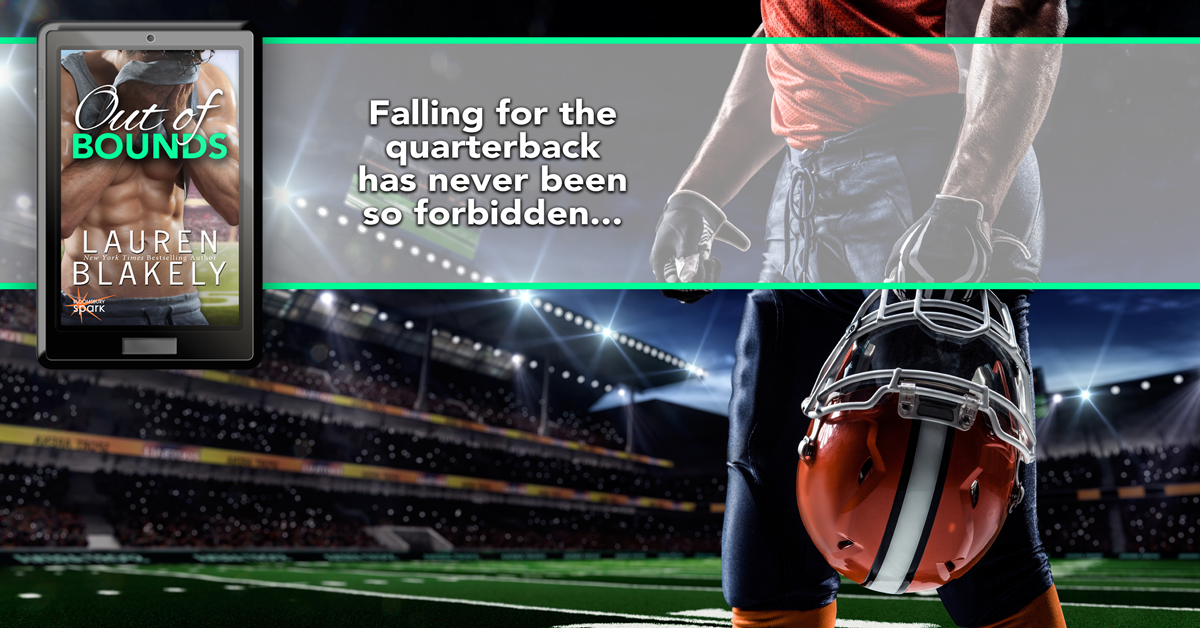 The first rule of football--don't screw with a streak.
My career is finally looking up, and I'm leading a new pro team down the field every Sunday. No way will I mess with that. But when I meet the most stunning and captivating woman I've ever seen, I tell myself one night will have to be enough.
But it's not. And now I can't get her out of my mind. Even when I'm playing. Even when I need to focus. Even when I'm on the hottest streak of my life.
And it turns out, she's not just some random woman I met. She works for the team. My team.
***
I only have one goal this season--do my part as the team's lawyer to keep them out of trouble. Help rebuild their reputation on and off the field. There's no room for error and certainly no room for a secret tryst with a player . . . even if he's the quarterback.
Right?

Ready to be swept off your feet? Meet the witty, sexy, dirty-talking quarterback Drew in OUT OF BOUNDS! Now available everywhere!

“Be on your best behavior, Drew,” he says, a teasing tone in his voice.

“I always am,” I reply, and the fact is, that’s true. Clean-cut is my nickname.

“And text if you’re done early.”

“If I’m done early, I’m having a date with my mattress.”

He groans. “You are the definition of no fun.”

I grin. “That’s me. That’s why Qwench wants me now. Because I know how to get a good night’s sleep and stay out of the line of fire.”

When I hang up, I step out of the car, hand the keys to the valet, and thank him. Then I head inside, where Stuart greets me in the room reserved for the event, claps me on the back, and introduces me to several people. A photographer snaps shots the whole time, and I play the role that’s hardly a role—the outgoing, non-trouble-making, peace-loving quarterback who doesn’t throw punches or raise fists, like others before me have.

Don’t smoke, don’t do drugs, don’t have unprotected sex, and I also don’t speed. Squeaky clean indeed. Not even a traffic ticket on the record, and certainly no knocked-up teenyboppers with mini Drews baking in their bellies.

Stuart introduces me to the red-haired, freckle-faced guy who heads up this charity. “And this is Drew Erickson. He’s our new starter. We’re thrilled to have him on the team, especially since he’s already active with many wonderful charitable endeavors,” Stuart says to the ginger-haired guy.

We exchange small talk for a few minutes, then Stuart drops a hand on my shoulder and tells me there’s someone else he wants me to meet. “I’d love to introduce you to a sharp-as-a-tack woman who makes sure I don’t fumble,” he says, then winks in case I didn’t realize he was making a joke.

I smile to let him know I got it—fumbling humor and all—then my smile turns into a ruler-straight line when I turn on my heels and see my surfer angel.

Holy shit. She’s hot as sin in a red skirt, white blouse, and black heels. She holds a drink. Her blond hair is twisted on her head. Damn. The smoking-hot look is almost enough to make me forget she blew me off. My dick, the traitorous bastard, has already come down with amnesia. The fucker wants her.

“This is Dani Paige. She’s an attorney for the team,” he says, and I attempt to school my expression as I come face-to-face with the woman who ditched me.

And all I want to do is toss her on my shoulder, stalk to the bathroom, slam the door, and ask her why the fuck she didn’t call. Then when she tells me it was because she was too busy getting off to thoughts of me, I’d kiss the hell out of her until she melted in my arms and begged me to take her. I’d happily oblige. Hoist her up, hook her legs around my hips, and fuck her against the wall until she comes harder than she ever has before.

Instead, I shake her free hand. “Pleasure to meet you.” Then I whisper, just for her. “Jaws.”