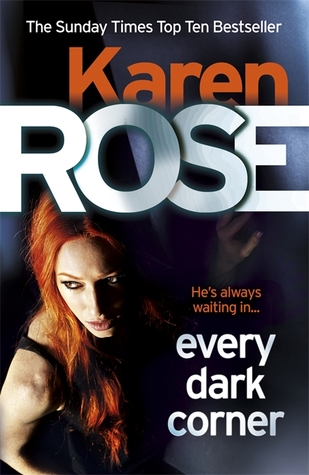 In this nerve-shattering novel from the New York Times bestselling author of Alone in the Dark, special Agents Griffin Davenport and Kate Coppola are on the trail of a depraved criminal...
When FBI Special Agent Griffin "Decker" Davenport opens his eyes after several days in a coma, there is unfinished business still on his mind. Decker's on the cusp of discovering the mastermind behind a human trafficking case, and he and his partner, Special Agent Kate Coppola, are determined to bring the perpetrator to justice. And they’re about to get a surprising new lead from a very unlikely source.   Eighteen-year-old Mallory Martin and her little sister, Macy, were the victims of an illegal adoption—sold by their addict mother for drugs. But their “benefactor” is not who everyone thinks he is. Mallory has never told his secrets before—the danger to her and her sister has always been too great. But everyone has a limit to what they can endure...
From the Paperback edition.

Karen Rose’s Every Dark Corner deals with some pretty horrific things such as child pornography and human/child trafficking along with issues of drug abuse/dependence.

Side Note: We met both the protagonists of the book in the last book “Alone in the Dark” but it was towards the end so you don’t actually need to read that one to understand what is happening in this book but the secondary characters and the plot would just make a lot more sense if one was aware of the events from the last book.

FBI Special Agent Griffin “Decker” Davenport has been undercover over the past few years and during towards the end of his stint as a personal security/bodyguard and later accountant to one of the people involved in human trafficking he finds out about missing kids, child pornography and child trafficking. Before he can hand off this information, everything goes sideways, his handler is murdered and he is gunned down and ends up in a coma.

Special Agent Kate Coppola has moved to Cincinnati to get away from horrific memories that seem to haunt her. Her best friend, Deacon Novak also happens to live in Cincinnati is a plus for her. Kate has been keeping Decker company while he is in coma, listening to his recordings during his undercover work and trying to find out what he discovered. Kate feels an intense connection to Decker maybe it’s because he seems to have no one, is alone like her.

Kate and Decker’s connection is sweet and their attraction to each other has been present ever since they first met. As with all Karen Rose couples, Decker and Kate have great chemistry and their backstory is heart breaking. Both of them have been through so much and they both understand each other’s pain. For Decker this mission takes on a more personal turn because of the involvement of children.

The story/plot is always intense with Karen Rose’s books as was the case with this one. I read the book in one sitting because the story was that gripping and I just really wanted to know what was going to happen next. Karen Rose writes some pretty dark and fantastic serial killers but this felt even more darker and creepier I suppose mostly because of kids aspect, not to mention the partner ‘The Professor’ is a very twisted person. He is a complete psychopath. I also really hated his entire family. From the start to the end, the book is fantastically paced mystery/suspense with twists and turns and a badass leading couple to get the monster who has destroyed so many lives and continues to do so. I enjoyed every moment of it.

Along with Decker, Kate and ‘the professors’ POV we got another POV in the book. I think having another POV of a victim or survivor really Mallory, showed  a different perspective on the pornography issue, not to mention it should how important it was for the FBI to stop the professor. It just made it all a bit more real and made me more invested in how things turned out for the poor girl.

Minor quibbles: View Spoiler »I could understand why stone hadn’t told anyone about his problems etc and he didn’t want his brother knowing but with what his career was he should really tired stopping or doing something since he was aware that this was happening for years, it didn’t make sense to me apart from plot reasons and the other thing was I wish we could have just a slight bit more of romance side of things. « Hide Spoiler

As a huge fan of Karen Rose’s book this one was another winner and I can’t wait for the next one!!