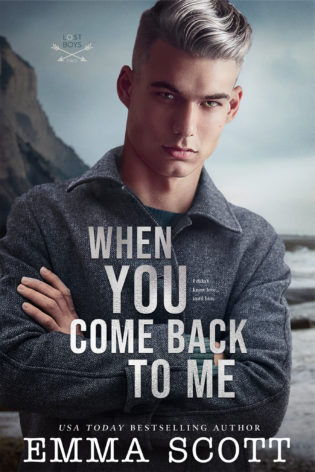 When You Come Back to Me by Emma Scott
Series: Lost Boys #2
on 27th September 2020
Genres: Coming of Age, Contemporary Romance, New Adult, Young adult
Pages: 386
Format: eARC
Source: the Author
Buy on Amazon US, Buy on Amazon UK

At Santa Cruz Central High School, they called them the misfits, the outcasts, the weirdos. But most of us knew them as the Lost Boys...
Holden Parish survived his parents' horrific attempts to make him "the perfect son." After a year's stint in a Swiss sanitarium to recover, he has vowed to never let anything--or anyone--trap him again. Brilliant but broken, he seeks refuge behind alcohol, meaningless sex, and uses his wicked sense of humor to keep people away. He only has to ride out one year in the coastal town of Santa Cruz with his aunt and uncle before he inherits his billions and can make his escape. Disappear.
Falling in love is not in the plans.
River Whitmore. Star quarterback of the Central High football team, Prom King, Mr. Popular, ladies' man. He leads the perfect life...except it's all a lie. His father has River's future in the NFL all planned out, while River's dream is to run the family business in the town that he loves. But his mother's illness is tearing the family apart and River is becoming the glue that holds them together. How can he break his father's heart when it's already shattering?
River's carefully-crafted façade explodes when he meets Holden Parish. A guy who dresses in coats and scarves year-round, drinks expensive vodka, and spends his free time breaking into houses for the fun of it. They're complete opposites. River seeks a quiet life, away from the spotlight. Holden would rather have dental surgery than settle down.
Holden's demons and River's responsibilities threaten to keep them apart, while their undeniable attraction crashes them together again and again, growing into something deep and real no matter how they resist.
Until one terrible night changes everything.
#MMromancePlease note, this book contains spoilers for The Girl in the Love Song

Following up from The Girl in the Love Song, Lost Boys book 2 brings us the story of Holden Parish and River Whitmore. Whom we met in the first book and since then I’d been eagerly waiting for Holden’s book. Holden was a mess in the first book but a very fascinating one.

From the moment the book starts, you get sucked in with the story of Holden’s past and we learn how bad things were for him and you can’t help but love the broken boy. The Holden we met as a senior, has the attitude of not giving a fuck about anything (which couldn’t be far from reality) and the only way he knows how to deal is by drinking his problems away. Sweet River on the other hand, is slowly suffocating under the burdens he has. He doesn’t want to let down his family, his father. His mother is ill and he just doesn’t know what to do. Added with the fact that he has to constantly pretend to be something he’s not. River is just so so easy to love.

They are opposites but no one can understand, love and care for each other like they do.

River and Holden, what to say. They see each other for who they really are. I loved them together (honestly not a surprise). They have their sweet moments, some funny ones but their romance is also filled with forbidden-ness, pain, tenderness, sacrifice and distance. They go through quite a lot and as a reader they make you through a rollercoaster of emotions. You can’t help but love them and want them to be together and finally get some peace and happiness.

I loved the first book in the series and this one is no different. This one is much more raw, heartbreaking but also beautiful. I loved the writing and it was a wonderful yet difficult journey seeing Holden and River get their HEA.

Overall, this is a angsty and heart touching MM romance by Emma Scott with some difficult topics and even more heartbreaking characters and romance with the addition of Holden’s humour makes it a great read.

On the stage, Miller spoke into the mic in a low, almost shy voice. “Hey, my name is Miller Stratton. I’m going to play a song by Coldplay. It’s called ‘Fix You.’”

I let my gaze slide to Holden, studying the contours of his profile—his chiseled jaw and cheekbones, strong nose, full lips. He swallowed, and I watched the movement of his Adam’s apple. Thoroughly masculine. Nothing feminine about it.

“Can I help you?” he whispered, eyes forward.

“It sucks not talking to you,” I said, as Miller strummed the first chords of the song. “Idon’t know why. You’re arrogant as fuck.”

Our song. Nothing was ours. There was no us. But Miller sang that if you never try you’ll never know, and the words pierced me like arrows.

I took my hand out of my pocket and let it hang by my side again. Again, my skin brushed Holden’s, sending shards of heat dancing up my arm while Miller sang about lights thatignite your bones. I looked at Holden and he looked at me.

Without letting myself think, I slipped my fingers around the side of his hand and slid my palm against his. He gasped slightly—a small intake of breath only I heard in the darkened auditorium. Then he let his hand settle into mine. Another heartbeat, and our fingers laced together.

“And I will try,” Miller sang, his rich voice hovering in the air in that silent auditorium.

A short silence fell before the crowd erupted in thunderous cheers, unlike anything I’veever heard. Miller’s version of the song was unlike anything I’d ever heard either, as if he were singing directly to me. To us. Because it’s our song.

Under the cover of applause, I let go of Holden’s hand and tugged the cuff of his coat.

I left without looking back but heard Holden’s footfalls following. Warning bells clangedin my head but were drowned in the thrashing beat of my heart that felt as it were trying to break free of its prison like it had at the pool. Only this time I was stone cold sober. No excuses. I pushed open the door next to the auditorium—the back area of the band room that was for instrument storage. Huge basses loomed in dimness, and drums of all sizes and styles lined the walls.

Holden followed me in and shut the door behind him. “Hello, friend.”

“I put in my college applications,” I said as he approached me in the darkness. “I’m going away to Texas or maybe Alabama this summer.”

“Establishing the rules, are you?” he drawled, though his voice was thick and tinged with nerves.

I swallowed hard. “Nothing’s changed. Nothing can change.”

“I told you,” Holden said, in front of me now. “I’ll never ask you for anything. I don’t have anything to give. Except this.”

I wanted to tell him that wasn’t true, that I was the one who had nothing to offer. I shouldn’t have led us here. I should walk out, but his goddamn voice, the scent of him, his presence was overwhelming. My hands itched to touch him, to grab him and…

My first kiss with a guy. It seemed as if I’d been waiting a lifetime for it and yet the moment was rushing at me like a speeding train.

“What are you going to do?” 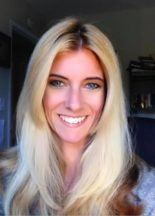 Emma Scott is a bestselling author of emotional, character-driven romances in which art and love intertwine to heal, and in which love always wins. If you enjoy thoughtful, realistic stories with diverse characters and kind-hearted heroes, you will enjoy my novels.

Release Blitz: When You Come Back To Me by Emma Scott

Cover Reveal: The Girl in the Love Song by Emma Scott

Release Blitz: When You Come Back To Me by Emma Scott

Review: The Girl in the Love Song by Emma Scott

Cover Reveal: The Girl in the Love Song by Emma Scott

Release Day: Bring Down the Stars by Emma Scott