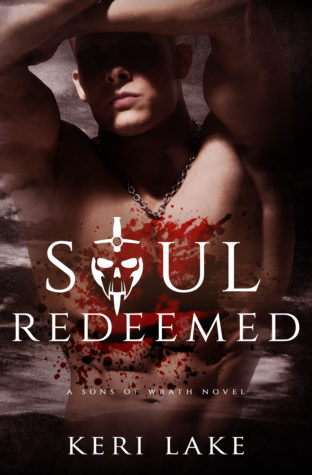 Being half incubus sucks sometimes.  Sure, the sex is great, but getting hounded by females gets old pretty fast. Especially when the only one Calix cares about has gone missing, propelling him into a downward spiral of depression and abstinence.

Trapped by a wannabe mad scientist inside a nightmare of her own, Ava longs to be free, even if it means going back to the only male she regrets having betrayed. All she needs is a single opportunity to lead the way.

Calix should hate Ava for the way she deceived him and his brothers. Yet, when she shows up looking like she’s been through a hell of her own, the sweet relief over her return battles the bitter sting of her betrayal, and Calix can’t bring himself to turn her away. Not to mention, an incubus who’s starved himself of sex for too long is a detriment to everyone—including his brothers—and the way Ava commands his body is exactly the release he needs.

Unfortunately, thanks to the lunatic who held her captive, she’s now a walking death trap to any male that tries to bed her. But danger is closing in, placing Ava’s life in jeopardy, and if Calix doesn’t find a way to control his virile urges, he might just be her deadliest threat.

I was so excited for this!! There aren’t many great new pnr series on the level that sons of wrath is so it was  wonderful being back in the world of Sons of Wrath!! This time it’s Ava and Calix story (I’ve tired to keep it as spoiler free as I can.).

Ava, a nephilim has been trapped in a nightmare for months now. After betraying Calla and the Sons of Wrath because of her brother’s twisted plans she finds herself kidnapped by a human who wants her to breed with the most vile demons to produce a pure offspring.

Calix, an incubi has spent the last few months looking for Ava, regardless of her betrayal he had loved her and she had disappeared. It has been a trial for him since he needs sex to survive but he doesn’t want anyone else but Ava. While he’s trying his best to stay true, he’s getting weaker and his demonic side is getting stronger.

Ava is in a really bad away, the experimentation has left her weak and all she wants to do is go back to Calix, maybe see if he can forgive her for her betrayal and still wants her that is before she finds out that because of the experimentation she can’t be with him. She escapes the hospital, unfortunately not realising the danger she herself will end up.

I really liked Ava and Calix together, they were in love and while things might be going bat shit crazy all the time they were still in love and nothing could change that. They were wonderful together, I loved seeing Calix being protective over her and taking care for her. They were willing to do so much for each other, I mean Calix would rather starve and be locked up than betray Ava and Ava would rather he do just instead of being hurt and in pain. How can you not root for couple like that. There’s also that Keri Lake’s couples have off the chart chemistry which also helps. 😛

The world of Sons of Wrath is brutal, there is violence, deadly demons and drugs. Cruses and torture are pretty standard and just a part of life it seems with now crazy human scientist thrown in to make things even more terrifying. The plot is as always twisty, turby with unknown dangers at every corner for our demons. The writing is amazing as well, Keri Lake has this talent of really making you feel things, you feel very betrayal, relief, heartbreak, love and hate the characters feel while reading, it’s truly extraordinary! Keri makes her characters work for their happy ending but my it’s glorious when they do.

Along with some newer characters that I’ll get to in a second we also get to see the other sons of Wrath, I loved all of them. Gavin and Sabelle are still going strong. Zayne isn’t doing so great, the poor demon lost his mate and now is on a very dangerous drug. Zeke is well Zeke even after what happened, I loved seeing more of Ferno, my poor pyro demon I’m glad he got something that would atleast give him something to hold on to after killing Zayne’s mate previously. We also see Logan and Calla and I’m so happy for them.

We meet some newer characters, one in particular Thais a fallen angel that seems to have very intriguing powers. I’m looking forward to see if she and Ferno may have something going on or if Xander will get his way finally.

Quibbles: I wish we gotten a bit more of Ava and Calix of how it was between them before her betrayal, maybe their meeting from one of their point of views and how they fell in love.

I love this series, I can’t wait to see what Keri comes with next and how the opened storylines, the questions are answered. This was a great addition to a fab series!