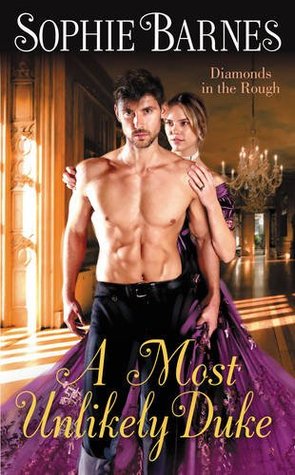 A Most Unlikely Duke by Sophie Barnes
Series: Diamonds in the Rough #1
Published by Avon on June 27th 2017
Genres: Historical, Regency
Pages: 384
Buy on Amazon US, Buy on Amazon UK, Buy on Kobo, Buy on itunes, Buy on B&N

He never thought he'd become a duke, or that the secrets of his past would cost him his greatest love...


Raphe Matthews hasn’t stepped foot in polite circles since a tragedy left his once-noble family impoverished and in debt. The bare-knuckle boxer has spent the last fifteen years eking out an existence for himself and his two sisters. But when a stunning reversal of fortune lands Raphe the title of Duke of Huntley, he’s determined to make a go of becoming a proper lord, but he’ll need a little help, and his captivating neighbor might be just the woman for the job…

After her sister’s scandalous match, Lady Gabriella knows the ton’s eyes are on her. Agreeing to tutor the brutish new duke can only lead to ruin. Although she tries to control her irresistible attraction to Raphe, every day she spends with him only deepens her realization that this may be the one man she cannot do without. And as scandal threatens to envelop them both, she must decide if she can risk everything for love with a most unlikely duke.

What is their favorite place to visit?

Denmark. It’s where I’m from. My parents have a summerhouse by the beach in the southern part and a house near Copenhagen. I love it there plus I get to see the rest of my family.

What are 5 things you must have with you when you write?

My laptop, a notebook, my Jane Austen Map of London, various pens in different colors and a hot cup of coffee.

Do you have any post-publishing regrets?

Yes! In my first book, How Miss Rutherford Got Her Groove Back, Tchaikovsky is mentioned as a current figure. I meant to change him to a different composer since he wasn’t even born at the time when the plot takes place, but I forgot. Really wish I’d seen that during edits. I haven’t used ‘fillers’ since.

Can you tell us a little about your book?

It’s a fresh spin on Pygmalion featuring a bare-knuckler boxer from the slums of St. Giles who suddenly becomes the Duke of Huntley. Navigating high society can be troublesome – especially with two younger sisters in tow – but thanks to his next door neighbor, the alluring Gabriella Radcliffe, he comes up to scratch while losing his heart in the process.

What are some books that you enjoyed recently?

I LOVED Julia Quinn’s The Girl With The Make-believe Husband. Right now I’m reading Sarah MacLean’s The Day Of The Duchess. Both authors are auto reads for me.

What types of scenes are your most favorite to write?

Definitely dialogue. When the characters are interesting and there’s a bit of tension, the dialogue pushes the story forward in a fun and interesting way. Describing what people are doing sometimes gets me while Love scenes are the hardest.

Can you tell us about your upcoming book?

The sequel to A Most Unlikely Duke is called The Duke Of Her Desire. It releases December 27th and features Raphe’s sister, Amelia, as she struggles to renovate a house on the edge of St. Giles and turn it into a school. Contending with her brother’s friend, the Duke of Coventry who’s been charged with protecting her, leads to a lot of quarreling, tension and high passion.

It was past eleven o’clock in the evening by the time
Raphe returned home, his knuckles tender and his body still sore from the fight. Glad to get out of the cold, he closed the door on the rain that now poured from a thunderous sky, shrugged out of his coat and hung it on a hook behind the door just as his sister Amelia entered from an adjoining room that served as a small parlor.
“Good evenin’.” She yawned, leaning against the door frame. Squinting through the darkness, Raphe echoed her salutation. “I thought ye would be asleep by now.”
Stepping past her, he entered their tiny kitchen and snatched up the tinder box.
“I was,” Amelia said, following him into the chilly room. A threadbare shawl was draped across her shoulders, and as she pulled it tighter with pale and trembling fingers, Raphe felt his heart lurch. This wasn’t right. His sister did not deserve to live like this. None of them did. Pushing aside such fruitless ponderings, he found a candle, struck a flint and held it to the wick until a flame began to bloom, driving the darkness toward the walls where it struggled against the light.
“If it makes any difference, Juliette’s safely tucked into bed.” Amelia said, referring to their younger sister, whose weaker disposition was a constant cause for unease. When Raphe lifted the lid of a nearby pot and peered inside, Amelia added, “I made soup for dinner.”
“Smells delicious,” he dutifully told her.
“We both know ‘ow untrue that is, bu’ I appreciate yer optimism.”
Meeting her gaze, Raphe made a deliberate effort to smile. “Per’aps I can manage some meat for us tomorrow.” It would certainly be a welcome change from the potatoes and turnips they’d been eating for what seemed like forever. Christ, he was so tired of having a sore belly all the time, and his sisters . . . they never complained, but he knew they needed better nourishment than what they were getting.
“That’d be nice,” Amelia said. Her tone, however, suggested that she doubted his ability to manage such a feat. Bothered by her lack of faith in him, he grabbed a chunk of bread and tore off a large piece. “A chicken ought to be possible. If we make it last a few days.”
Amelia simply nodded. Grabbing a cup, she filled it with water and placed it before him. “I miss the smell of a bustlin’ kitchen.”
The comment threw him for a second. “Wha’?”
“Meat roastin’ on the fire, bread bakin’ in the oven.” She shook her head wistfully. “It’s funny. I
can’t picture Mama, but I remember Cook—plump cheeks an’ a kind smile. I remember bein’ ‘appy in the kitchen back ‘ome.”
The sentimental thought made Raphe weary. He didn’t bother to point out that she’d only been seven when they’d lost their parents and there’d been nothing left for Raphe to do but turn his back on the house in which they’d spent the early years of their childhoods and walk away, taking his siblings with him. He’d been no more than eight years old and with a mighty burden weighing on his shoulders. “I know this isn’t the sor’ of life that any of us ever imagined.”
Feeling his temper begin to rise at the memory of what their parents had done to them all, he added, “Hopefully, in time, things’ll get better.”
“I’m sure ye’re right.” Could she possibly sound any more unconvinced?
He ate a spoonful of soup, the bland flavor just a touch better than plain hot water. Amelia took a step forward. “The reason I didn’t retire with Juliette earlier is ’cause of this letter.” She waved a piece of paper in his direction. “It arrived for ye today while ye were out.”
Frowning, Raphe stared at her. “Do ye know who sent it?” He couldn’t even recall the last time he’d received a letter. Nobody ever wrote to him or his sisters.
“The sender’s name’s smudged. So’s the address. It’s a miracle it arrived here at all.” Handing the letter to Raphe, she watched as he turned it over and studied the penmanship. Sure enough, the only legible part of the address, which even appeared to have been altered once or twice, was his name: Mister Raphael Matthews.

Giveaway (Win a Print Copy of A MOST UNLIKELY DUKE (U.S. only))
a Rafflecopter giveaway

Born in Denmark, Sophie Barnes spent her youth traveling with her parents to wonderful places all around the world. She’s lived in five different countries, on three different continents, and speaks Danish, English, French, Spanish and Romanian. She has studied design in Paris and New York and has a bachelor’s degree from Parsons. But, most impressive of all, she’s been married to the same man three times—in three different countries and in three different dresses.
While living in Africa, Sophie turned to her lifelong passion: writing. When she’s not busy dreaming up her next romance novel, Sophie enjoys spending time with her family, swimming, cooking, gardening, watching romantic comedies and, of course, reading. She currently lives on the East Coast.

Excerpt And Giveaway: His Scandalous Kiss by Sophie Barnes