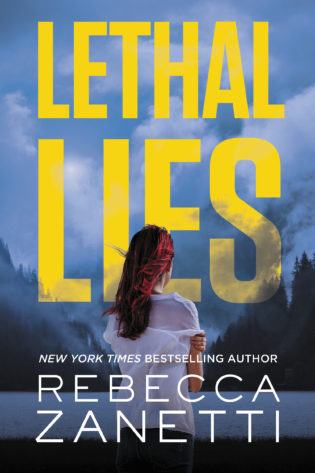 New York Times bestselling author Rebecca Zanetti brings us the second book in a thrilling romantic suspense series.
A deadly secret can't stay buried forever . . .
Revenge. It's the only thing that will help Anya Best sleep at night. The serial killer who murdered her sister is on the loose, and Anya will stop at nothing to put him behind bars-even use herself as bait to lure him out of hiding. But she can't do this alone.
Private investigator Heath Jones's job is to bring bastards to justice. This time it's personal. He knew the Copper Killer's latest victim so when her sister asks for his help, he's all in. But when Anya uses the media to taunt the killer, she exposes Heath's identity, putting them both in jeopardy. Now, secrets buried long ago are coming to light and the forces determined to destroy him are watching Heath's every move, waiting to exact their own revenge. And they'll use anything and anyone to get to Heath.
With twists and turns that will take your breath away, LETHAL LIES is sexy, action-packed suspense at its very best from New York Times bestselling author Rebecca Zanetti.

Can you tell us a bit more about lethal lies and what inspired you to have a serial killer plot in this book?

I’ve always wanted to write a serial killer plot, and this book just lent itself to that, considering it was set up in the first book.  I liked the idea of the detective agency looking for the lost (because the men are a little lost), and adding a serial killer into that mix seemed to work.  I hope readers enjoy it!

Anya and Heath both sound very fascinating…Can you share 3 positive and negative personality traits of Anya and Heath?

What is your all time favourite romance book/series and why?

I really like the Death series by J.D. Robb because the characters are so fascinating, especially Roarke.  Now that’s a hero!

Is there a romance genre that you haven’t yet written in but would really like to?

I’ve hit a few of the genres already and think it would be fun to write a romantic comedy.  Something really funny and sexy.

What are you currently writing? Any hints??

I’m working on TWISTED TRUTH, which is the third book in the Blood Brother Series.  It features Denver, the strong and silent type, and Noni, a woman hunting down a kidnapper.  Denver broke her heart a year ago, and she needs his help now.