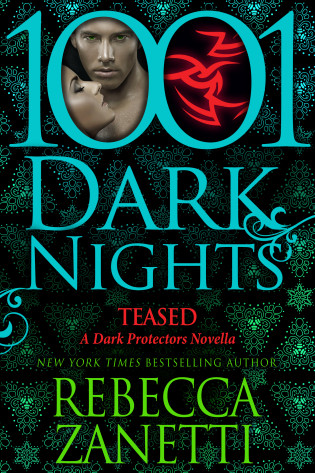 For almost a century, the Realm’s most deadly assassin, Chalton Reese, has left war and death in the past, turning instead to strategy, reason, and technology. His fingers, still stained with blood, now protect with a keyboard instead of a weapon. Until the vampire king sends him on one more mission; to hunt down a human female with the knowledge to destroy the Realm. A woman with eyes like emeralds, a brain to match his own, and a passion that might destroy them both—if the enemy on their heels doesn’t do so first.

Olivia Roberts has foregone relationships with wimpy metro-sexuals in favor of pursuing a good story, bound and determined to uncover the truth, any truth. When her instincts start humming about missing proprietary information, she has no idea her search for a story will lead her to a ripped, sexy, and dangerous male beyond any human man. Setting aside the unbelievable fact that he’s a vampire and she’s his prey, she discovers that trusting him is the only chance they have to survive the danger stalking them both.

It was great to return to the world of Dark Protectors and see some familiar faces. This is a fairly short review because I didn’t want to spoil

The novella has a bit of action/fights, some sexual tension, some adorableness along with a happy ending. What is not to like?

Chalton Reese is the now hacker former assassin of the realm and is close friends with the Kayrs family (the ruling family of the realm).  He is sent on a mission by his King to find the source behind the articles being published on a new species with more chromosomes than humans (all the supernatural kind basically). Chalton is investigating the writer of the articles who is Olivia Roberts. Just observing her leads to a interesting turn of events when Olivia is almost kidnapped and saved by Chalton. The rest of the story follows Chalton and Olivia protecting themselves and Chalton trying to find out who the source is from Olivia and failing and them falling in love with each other along with some twists and turns that Chalton and Olivia did not see coming.

I loved the dynamic between Chalton and his brothers, I hope we get to see them again soon. I also liked the reveal of who the source turned out to be.

Overall, solid 4 stars and another win by Ms. Zanetti.

“I don’t know what you’re talking about.”

He exhaled and stretched out long, very long, legs. “Sure you do. Your first two articles in the series detailed missing researchers from Oregon along with hints about their missing research, all leading up to an article coming next week with a big reveal. I’m assuming the big reveal is the actual research into chromosomal pairs, into extra ones belonging to an imaginary species, and you’re being duped.”

“Oh yeah?” She put her hands on her hips and pivoted in the seat to face him. “If I’m being duped, then why are people trying to either kidnap or shoot me?” She was on to the find of the century, and she needed to get back on track to meet her source for the evidence. “Let me out of this car, and I won’t press charges.”

No. Not at all. He looked like some badass vigilante in tailored clothing. All muscle, intelligence, and…maleness. So damn male he could define the word. “You should be worried,” she countered, her stomach dropping. The guy couldn’t care less. She’d seen his face. She knew his name. “You’re going to kill me,” she whispered, her heart clenching. “Or try to,” she added quickly.

He tossed his empty water bottle into a trash receptacle near the door. “I’ve saved your life twice. If I wanted you dead, you’d be dead.”

A chill crawled down her back. “But you need the information you mentioned.” Then would he kill her? Or try to?

He leaned toward her, bringing heat. “Listen, Livy. I will not kill you. I promise.”

Livy? Only her grandpop called her that, and hearing the nickname from Chalton’s handsome lips gave her odd tingles she really had to banish. She pressed her lips together. “Have you killed anybody before?

She knew it. Of course he had. The guy was definitely a soldier from the way he moved. “In times of war?”

Hope unfurled inside her. “In other times?”

“We’re usually at war.” He shrugged