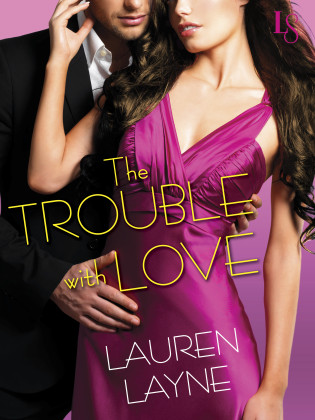 As Lauren Layne’s salacious Sex, Love & Stiletto series returns, a jaded columnist discovers a steamy way to get over an old flame: falling for him all over again.

As Stiletto magazine’s authority on all things breakup-and-heartache, Emma Sinclair writes from personal experience. Five years ago, Emma was Charlotte, North Carolina’s darling debutante and a blushing bride-to-be. Now she’s the ice queen of the Manhattan dating scene. Emma left her sultry Southern drawl behind, but not even her closest friends know that with it she left her heart. Now Emma’s latest article forces her to face her demons—namely, the devilishly sexy guy who ditched her at the altar.

After giving up everything for a pro-soccer career, Alex Cassidy watches his dreams crumble as a knee injury sidelines him for good. Now he’s hanging up his cleats and giving journalism a shot. It’s just a coincidence that he happens to pick a job in the same field, and the same city, as his former fiancée . . . right? But when Emma moves in next door, it’s no accident. It’s research. And Alex can’t help wondering what might have been. Unlike the innocent girl he remembers, this Emma is chic, sophisticated, and assertive—and she wants absolutely nothing to do with him. The trouble is, Alex has never wanted her more.

Izy: Who is more likely to (Emma or Cassidy):

∞Be more affectionate in public?

Lauren: Oh gosh … neither! These are two pretty private people. They’d be in mutual agreement that what they have together is between them and only them.

∞Apologize first after an argument/fight?

Lauren: Alex, I think, but mostly because he’s good at “handling people.” I don’t know that he’d actually be the first to think he was wrong 🙂

∞Give a better gift for an occasion?

Lauren: Emma, for sure. She’s an observer. The type of person that sits quietly back and watches the world around her. She’d absolutely know the perfect thing you wanted, even before you know you want it!

Izy: Which book was the most fun to write in the series and why?

Lauren: Hmm, a definite toss up between After the Kiss, and this one (The Trouble With Love). After the Kiss was just pure fun. Julie was the easiest heroine to write for me, even though she’s the most different from my own personality. And Mitchell Forbes is 100% my kind of hero! Reserved, uptight and sexy. Plus, it was the first one, so my fingers literally flew across the page, struggling to capture the world as quickly as my imagination was creating it.

The Trouble With Love was a real treat though, because it was such a long time coming. I’d been building up this love story for three books, so by the time I sat down to write it, it basically wrote itself! It was also the easiest to write, I think because the Stiletto world was so familiar to me by this point. And we authors LOVE ourselves an “easy” book 😉

Izy: Which book took a turn you didn’t expect in the series and why?

Lauren: Oh, absolutely #2! Love The One You’re With … let’s just say everything changed about that book from conception to the type it hit the “shelves.” It used to have a different title (The Last First Kiss was the original title), and a different hero! Jake was originally “Jack” and he was a lawyer in need of a fake girlfriend. There was nothing wrong with the original direction on paper, but I kept trying to sit down and write that paper, and I just couldn’t! It would not flow! So I got permission from my editor to re-imagine the entire thing, and changed pretty much every single thing except for the heroine. Although honestly, even Grace was a bit of a surprise! At the start of the story, I thought she’d be a bit prissy, but she was incredibly warm and approachable once I got to know her!

Izy: All of the heroines in the series (Julie, Riley, Grace and Emma ) which do you think you have most in common with personality or likes and dislikes wise?

Lauren: Probably Emma; I’m quite reserved “in person,” and tend to be wary of messy displays of emotion. I’m definitely sarcastic (like Riley) but in a subtler way, again like Emma; the type to make muttering comments under my breath rather than blurt them out for all to hear (Riley). Julie’s much friendlier than me, and Grace is nicer 😉

Izy: Anything you want to tell the audience about the book?

Lauren: The Trouble With Love is really “the ultimate” in second-chance love. Not only did these two troubled character used to love each other, they were going to get married. They were 100% committed to each other before it all unraveled. Watching them put that back together is the ultimate heart-wrench journey, if I do say so myself.

Izy: Thanks for answering the questions Lauren. I Loved Emma and Cassidy! <3 🙂