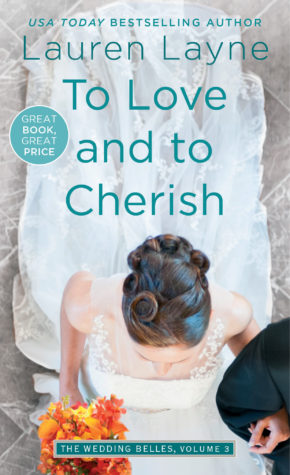 To Love and to Cherish by Lauren Layne
Published by Simon and Schuster on October 18th 2016
Genres: Fiction, Romance, Contemporary, Contemporary Women, General
Pages: 320
Buy on Amazon US, Buy on Amazon UK, Buy on Kobo, Buy on itunes, Buy on B&N

Sex and the City meets The Wedding Planner in The Wedding Belles, a contemporary and witty romance series about three high-powered New York City women who can plan any wedding—but their own.
Alexis Morgan has spent the past eight years devoted to turning her tiny start-up into Manhattan’s premiere wedding planning company, The Wedding Belles. Now that her business is thriving, it’s time to turn towards her much neglected personal life, and Alexis approaches her relationships like she does everything else: with a plan. Not a part of that plan is Logan Harris, the silent partner in the Belles, and the one person who’s been there for her since the very beginning. But Alexis needs someone fun, and Logan’s all business, all the time—except when a late night at the office ends with an unexpected kiss that leaves the usually cool and together Alexis reeling.
Logan has lusted after Alexis since the day he walked into the tiny Harlem apartment that used to double as her office. But the ambitious wedding planner has always been untouchable...until now. Alexis has made it clear that she’s on the dating market—and equally clear that he’s not in the running. But when Alexis finds herself in need of a date for her sister’s last minute wedding in Florida, Logan knows it’s the perfect time to show Alexis that there’s more to him than numbers and spreadsheets—and beneath the pinstripes and glasses lies a hot-blooded heartthrob. As Florida’s sultry days turn into even hotter nights, Logan’s out to convince Alexis that the fling of a lifetime could just maybe turn into forever...

The sexy British accented startled Alexis out of her thoughts, and she glanced up, both alarmed and intrigued to find that the face that awaited her was every bit as appealing as the voice.

The man was about her age—early, maybe midtwenties—and ridiculously cute. His hair was dark and maybe just a touch too long, as though he intended to get a haircut but kept forgetting. The eyes were brown and friendly, accented by trendy black-framed glasses.

The chunky cable-knit sweater with elbow patches—for real—bordered on dorky, but then, Alexis had always had a soft spot for dorky. He had a bit of the Clark Kent thing going on, which had always been far more her type than the overrated Superman.

“Hi,” she replied quickly, realizing that she’d been staring.

His smile grew wider as he extended a hand. “Logan Harris.”

Darn. Even the name was good.

“Does that come with a last name?” he teased, lowering himself to the vacant barstool beside her.

“Not to strange men,” she retorted.

“I could buy you a drink. Get rid of the ‘strange’ part.”

Alexis’s smile slipped as she remembered that romance, even flirting, wasn’t part of her plan. She’d learned the hard way that she could have one or the other—her own business or a boyfriend—not both. And even if she wanted the latter, the latter didn’t want her back.

“No thanks; I’m fine,” she said, letting the slightest amount of chill enter her voice. The ice-princess treatment, Roxanne called it.

Logan shrugged, undeterred. “All right then. May I borrow your menu?”

She nodded, and he picked it up, perusing it for several moments and paying her no attention.

It was both a relief and also a bit of an insult, if she was being entirely honest, to be given up on so easily.

Alexis tried to turn her attention back to her laptop but watched out of the corner of her eye as he finally shut the menu, waiting patiently to catch the bartender’s eye.

“Hi there,” he said, when the bartender ambled back over. “I’d like a Stella, and a maybe bite to eat?”

Alexis didn’t miss the once-over that the bartender gave Logan before the curvy redhead leaned over the bar, displaying perky boobs as she clicked her pen and pulled a notepad out of her back pocket.

“Shoot,” the bartender said flirtatiously, looking a good deal friendlier than she had when she’d spoken to Alexis.

Not that Alexis blamed her. A cute Brit could do that to a girl.

“All right then,” Logan said. “I’d like the burger, medium, with Swiss. Fish and chips, extra tartar, and . . . how’s your chicken club?”

The bartender blinked. “It’s good. But you want all that?”

“Suit yourself,” she said, scribbling Logan’s order on the pad.

“Hungry?” Alexis couldn’t resist asking after the bartender moved away.

Logan gave a sheepish smile. “I’m a recovering student. I sometimes get so wrapped up in my day that I forget to eat.”

“A recovering student. What does that mean?”

He turned slightly toward her. “Someone’s showing plenty of interest in a strange man.”

He gave her an easy smile. “Everyone’s in the market for a friend, Alexis.”

She opened her mouth and then shut it as she realized he was right. She could use a friend. She’d spent her entire life in Boston and knew almost nobody in New York. This guy seemed nice and nonthreatening enough—what would be the harm in a little conversation over dinner? It had been too long since she’d had somebody to share a meal with.

Logan seemed to know the moment she capitulated, because he turned more fully toward her. “A recovering student, Alexis, is a recent graduate. One who hasn’t quite absorbed that there will be no more finals, no more requisite all-nighters, and no more dorm sex.”

He gave her a wry look. “How young do I look, darling? MBA from Columbia. Just finished up end of last year.”

She felt a little stab of relief that he wasn’t twenty-two.

He leaned toward her slightly. “Twenty-five next month, just in case you were wondering. As a friend.”

She tried to hide her smile and failed. “Columbia, huh? You’re a long way from home.”

“Noticed that, did ya?” He winked. “I came out here for undergrad, also Columbia. Always figured I’d go back to London and maybe someday I will, but . . .” He shrugged. “Seems I have stuff to do here first.”

“Such as?” She took a sip of her wine, dismayed to see that it was half-empty.

“Well, this will probably shock you, given my vast amount of brawn, but I’m an accountant. Or at least I will be, once I get my business up and running.”

Alexis was impressed. “Your own business?”

Most twentysomethings, even those with an entrepreneurial bent, opted to get a few years of work under their belts for someone else before branching out on their own.

He nodded. “I’m working out of my flat for now, but I’m hoping to lease some office space soon, get some legitimacy. If nothing else to get my father off my back.”

“He’s not a fan of your plan?” Alexis asked.

Logan’s shoulder lifted, and for the first time he seemed a little sad. “Both parents have had it in their head that I’d come home. Run the family business in London.”

He spun his beer glass idly. “Financial consulting firm. My father’s the CEO, Mum’s the COO.”

“I was going to say impressive. That they work together—without killing each other, I mean.”

“They’re in love. It’s atrocious,” he said with a wink. “What about your folks?”

Alexis laughed. “Not in love. They divorced when I was in high school. Dad’s remarried and happy now, I think. Mom not so much.”

She pursed her lips, surprised and yet not entirely unsettled by the personal question. “It’s been a while since anyone asked me that. Since I even thought about it, really.”

She didn’t have to think that long. “I’m almost happy.”

“You sound quite confident on that.”

She shrugged. “Let’s just say that I need a few things to fall into place in my professional life, but once that happens . . . yeah. I’ll be happy.”

She’d make sure of it.