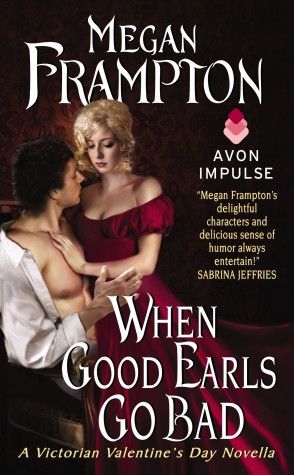 Megan Frampton’s Dukes Behaving Badly series is back, though this time it’s an earl who’s meeting his match in this delightfully fun and sexy novella!

What’s a lovely young woman doing asleep in his bed? Matthew, Earl of Selkirk, is shocked to discover it’s his new housekeeper! She’s a far cry from the gray-haired woman he expected. Matthew is no fan of surprises, and Annabelle Tyne is pure temptation. Perhaps he shouldn’t have had her hired sight unseen.

Annabelle, co-owner of the Quality Employment Agency, is no housekeeper, but she wasn’t about to lose a potential client simply because there was no one to fit the bill. Imagine her shock when the Earl arrives at his London townhome and she’s awoken in the night by the most attractive man she’s ever seen.

Matthew is a man who lives life by the rules, but sometimes rules are made to be broken…and being bad can be very, very good.

“What is Scotland like? I’ve never been, at least not that I know of.” Miss Tyne rested her elbows on the wooden table, her eyes the brightest spark in the dimly lit pub.

Conversation had stopped when the food arrived. Both he and Miss Tyne were apparently starving, since they spent the first fifteen minutes of their meal together in complete silence, both just concentrating on eating.

He’d glanced at her a few times, of course, just to ensure they weren’t in some sort of awkward silence of which he wasn’t aware, but she seemed just as happy as he was not to talk. That was unexpected, given how much she seemed to like to talk. Unexpected, but not one of those unpleasant unexpected surprises; instead, it felt as though he might not know all about her yet. That was unusual as well; normally he could assess a person within a few minutes of making their acquaintance.

“Here like a pub, filled with laborers and solicitors and men who seem as though they are very important? Possibly a few women who appreciate the company of important men?” Her smirk told him she was joking. That she saw fit to do so was another unexpected item to add to the list of things he now knew about her. Few people joked with him, and of those, he liked very few of their jokes.

What made her so different from most people?

“No, Miss Literal, not like here.” He allowed himself to roll his eyes at her. Something he normally chided his sisters for doing. Of course, they were usually rolling their eyes at him. “Where I live, in town, Edinburgh that is, is a busy city much like London. Different accents, of course, but most things are the same.”

Now it was her turn to roll her eyes. “Honestly, the same? I should think not, and I’ve never even been there! The people, the language, the food, the habits, the celebrations, the clothes—all of those things are different in different areas. The west side of London is different from the docks, correct? You wouldn’t say all of London is all the same; how can you say Edinburgh is?”

She waved her hand around the pub. “Even here, where things are the same, the people are different. You, for example, are clearly of the nobility; your linen is fresh, your clothing is well-kept and well-made, and you are well-groomed.” She picked his hand up from the table and examined his fingers. “Your nails are cut, and you don’t even have any dirt underneath your fingernails.”

He drew his hand back and looked at it. She was correct, and he hadn’t even thought about it.

“Now look at my hand,” she said, stretching it out to him. He took it, the warmth of her skin reminding him of before when his naked body had been close to hers, however briefly.

He could not get distracted by that, however. It wasn’t practical.

Her hand was small and its shape was delicate, but the skin was rough and her fingernails were ragged, although clean. He looked at the back of her hand, then turned her hand over and looked at her palm, which had a few red spots where calluses were beginning to form.

“You’re not a housekeeper,” he said, sliding the pad of his finger along one of those new calluses. “If you were accustomed to this sort of work, your hands would be rougher. You obviously work with your hands in some capacity, but not doing what you did today.”

“Oh!” she said, snatching her hand back and stuffing them into her pockets. “You are very observant, even if you think two completely different cities are similar to one another.” She stuck her tongue out at him quickly, then clapped her hand over her mouth, her eyes wide. “I am so sorry, I should not have done that.”

Matthew tried to keep himself from smiling, but couldn’t, not in the face of such . . . joy. She was practically overflowing with it, and he wished he could figure out a way to capture some of that joy for himself. “I am not offended at all; in fact my sisters would be applauding you right now.” He spoke in a lower tone. “I am very glad they are not here for that very reason.” Not to mention he was definitely liking being alone with her, and wasn’t that another surprise?

“Shall we go?” Matthew said, signaling to the man behind the bar. He made the “final bill” gesture, then drew out a few coins from his pocket and laid them on the table.

The barkeep came bustling over, an obsequious smile on his face. “Four shillings, my lord.”

Matthew counted out the four shillings, then rose from his seat.

The barkeep picked up the coins, scowling. “You’re Scottish, aren’t you?” he said in an accusing tone.

Why did that keep coming up?

Matthew didn’t bother to reply, just strode around to Miss Tyne’s side of the table and took her cloak, holding it up so she could put it on.

As she wriggled into it, her arm brushed his side, and Matthew felt something very unexpected indeed.

Something he wished to expect more of, and hopefully in the near future.