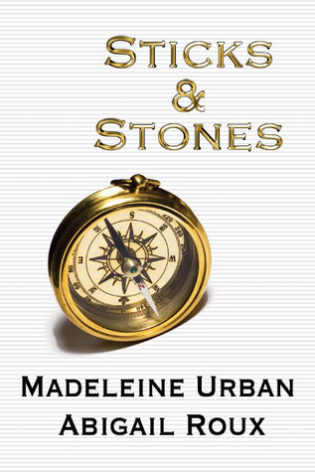 Six months after nearly losing their lives to a serial killer in New York City, FBI Special Agents Ty Grady and Zane Garrett are suffering through something almost as frightening: the monotony of desk duty. When they're ordered to take a vacation for the good of everyone's sanity, Ty bites the bullet and takes Zane home with him to West Virginia, hoping the peace and quiet of the mountains will give them the chance to explore the explosive attraction they've so far been unable to reconcile with their professional partnership. Ty and Zane, along with Ty's father and brother, head up into the Appalachian mountains for a nice, relaxing hike deep into the woods... where no one will hear them scream. They find themselves facing danger from all directions: unpredictable weather, the unrelenting mountains, wild animals, fellow hikers with nothing to lose, and the most terrifying challenge of all. Each other.

In sticks and Stones we have Ty and Zane coming to Ty’s hometown for vacation that is ‘suggested’ by their director. Ty and Zane are continuing to have issues with the events from the Cut and Run and ofcourse their relationship. They are dealing with the way most people do, by avoiding talking about it. Even after the somewhat confession of their feelings in the last book they still don’t know where they stand with each other and still finding it difficult to be vulnerable around one and other.

This was slightly better than the last one, even with the completely unbelievable way their attackers die.

I mean if I remember correctly, there’s a storm, a flooding, explosions, a panther attack, a person nearly dying of septicaemia, family issues. You know your average vacation from hell.

Ty’s father is just awful for no damn reason to Ty, makes no sense of why that’s just happens because he seems alright at the start and then suddenly he’s just acting like an arse. He really hurt Ty and what really bugged me was we never really see him apologise or show Ty that he feels different after all the events follow. His father made a very stupid decision that nearly costs them their life.

There isn’t just enough progress in their relationship or their personal issues in this one.

There is still slight disjointedness in the book, also there should some sort of change in the way that tells that the pov is from a different person because I had to reread bits because the change was so sudden.

I liked Deuce even though he wasn’t really helpful at his actual job and Ty’s mum.

There is no suspense in this one, it just a hiking trip with trouble on the way.

I’m still not seeing why people love the couple/series so much, I liked them but I don’t know… Maybe its just me ? I’ve already borrowed the next book in the series so I’ll read that and see if I feel differently.