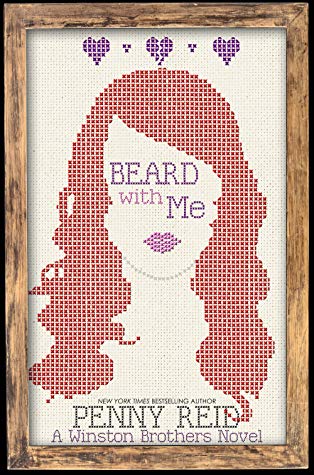 ‘Beard With Me’ is the origin story of Billy Winston and Scarlet St. Claire (aka Claire McClure) and is just the beginning of their epic love story.
No one is better at surviving than Scarlet St. Claire and making the best out of circumstances beyond her control is Scarlet’s specialty. In an apocalyptic situation, she’d be the last person on earth, hermitting like a pro, singing along to her CD Walkman, and dancing like no one is watching.
Scarlet is clever, Scarlet is careful, and Scarlet is smart . . . except when it comes to Billy Winston.
No one is better at fighting than Billy Winston and raging against his circumstances—because nothing is beyond his control—is Billy’s specialty. In an apocalyptic situation, he’d be the first person on earth to lead others to safety, overcome catastrophe, or die trying.
Billy is fearless, Billy is disciplined, and Billy is honorable . . . except when it comes to Scarlet St. Claire.

I have been waiting for Billy’s story since he was introduced in Beauty and the Mustache and we found out that the Winston brothers would be getting their own stories. Over the course of the series we have been getting glimpses of Billy and Claire so I was beyond excited to read their backstory in Beard With Me and how they met and what had happened to get them to be where they were today.

Onto the positives, it’s written really well as expected really, it’s Penny Reid. Theres so much heartbreak in this book. Both Billy and Scarlett have a very difficult life. The Winston’s have been through a lot of crap and their mother was truly lovely and it didn’t really help what we know that she dies in the future :/ I did like the more lighter moments (duh) bought on by Cletus because it stopped the book from too gloomy. I really want to see Billy and Claire get their happily ever after. This book really made me adore Billy more. I liked that we got to see the younger versions of our favourite characters even though it didn’t feel they were actually young…I also liked seeing Billy and Scarlett’s sweet moments.

I don’t know if it was because of those expectations I’d had for them for years or maybe its my issues with reading young adult stuff (i.e that I rarely read them because of the way they deal with stuff and all the wishy washy emotions and endless drama that seems to come with them but I digress) that while I enjoyed this book, I didn’t entirely love it for several reasons but I’ll state 3 bigger one here; while the characters are very much young adults, how they talk and interactive and their monologues don’t entirely suit that, I kept forgetting of how old they were because of the way they talked. Secondly because of the fact that they are both young adults, Scarlett 14 and Billy 16 respectively, it just made me feel squirmy at times reading their scenes together and then there was the Ben and Scarlett thing which was even more ://// because of how much more older he is too her. If they had been adults the age difference wouldn’t have mattered but they are not and Ben is an adult but Scarlett isn’t so. :/// It felt just unnecessary to have that, I didn’t like any of it which made it difficult for me to read, it just felt creepy because for a supposedly good guy him lusting after a 14 year old is gross and we know that Ben and Scarlett get married so it made it even more blegh. Lastly I would have really preferred if this was a novella instead of the whole length novel this is because I just so much of it could have been condensed or perhaps the flashbacks etc could have been saved and we could gotten all that in beard necessities. I’m probably alone in that but it would have been personally better for me to have that together as a whole. I don’t like misunderstanding storylines and all that that could really be solved in an afternoon, actually with just one proper talk so for this thing to have lasted for 2 decades is just sigh. Also wasn’t a fan of the whole Sam thing…so many parts of this book frustrated and angered me especially why they actually separated and don’t talk, it was just so typical and for some reason I’d thought it would be something more than that.

Having said that I will be reading their book when it comes out just have to moderate my expectations accordingly. Anyways I’m eagerly waiting for Billy to get his HEA.

Enter the giveaway for a signed paperback set of The Winston Brothers Series!