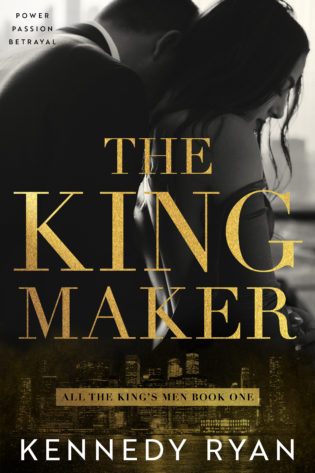 The Kingmaker by Kennedy Ryan
Series: All The King's Men #1
on 28th October 2019
Genres: Contemporary Romance
Buy on Amazon US, Buy on Amazon UK, Buy on B&N

Raised to rule, bred to lead and weaned on a diet of ruthless ambition. In a world of haves and have nots, my family has it all, and I want nothing to do with it.

My path takes me far from home and paints me as the black sheep. At odds with my father, I’m determined to build my own empire. I have rules, but Lennix Hunter is the exception to every one of them. From the moment we meet, something sparks between us. But my family stole from hers and my father is the man she hates most. I lied to have her, and would do anything to keep her. Though she tries to hate me, too, the inexorable pull between us will not be denied.

And neither will I.

All The King’s Men Duet, an all-new powerful and emotional duet from RITA ® Award winning author Kennedy Ryan, is coming October 28th, and we have the first sneak peek!

A fat raindrop plops on my nose, sliding down the bridge, followed by another and then a wet succession.

“Aw, hell.” I pull my jacket up on my elbows to provide some shelter for the two of us, but the rain trebles, more coming down and faster.

“We still have four blocks before my place,” I say. “Sorry, but the weather is unpredictable this time of year.”

Rain has already started molding the thin dress to her body, faithfully hugging every swell and curve. A hard shiver runs through her and her teeth chatter.

“Come on.” I grab her hand and duck into an alleyway. An overhang provides a tiny patch of dry ground and shelter. “We may be able to wait it out. These showers sprout up and pass over like they never happened.”

We’re sandwiched between two buildings and there is barely any light, but the moonlight finds her, sculpting shadows beneath her cheekbones and etching dark crescents of her lowered lashes. The rain has smeared her mascara, and water-slicked hair flattens to her head. She should look bedraggled, but she manages to be the prettiest girl I’ve ever seen.

I bend, tentative at first, even after last night. Even after making love to her again this morning when I chased her up the stairs. I approach slowly, giving her the chance to refuse, but she doesn’t. She meets me, eyes open, lips eager, hands bunched in my wet hair. It’s a freshwater kiss, made of rain and passion.

Be notified FIRST when The Kingmaker goes live: http://bit.ly/2oRuDhf

A Top 30 Amazon Bestseller, Kennedy Ryan writes about women from all walks of life, empowering them and placing them firmly at the center of each story and in charge of their own destinies. Her heroes respect, cherish and lose their minds for the women who capture their hearts.

She is a wife to her lifetime lover and mother to an extraordinary son. She has always leveraged her journalism background to write for charity and non-profit organizations, but enjoys writing to raise Autism awareness most. A contributor for Modern Mom Magazine and Frolic, Kennedy’s writings have appeared in Chicken Soup for the Soul, USA Today and many others. The founder and executive director of a foundation serving Atlanta Autism families, she has appeared on Headline News, Montel Williams, NPR and other media outlets as an advocate for families living with autism.

Review: All the King’s Men Duet by Kennedy Ryan