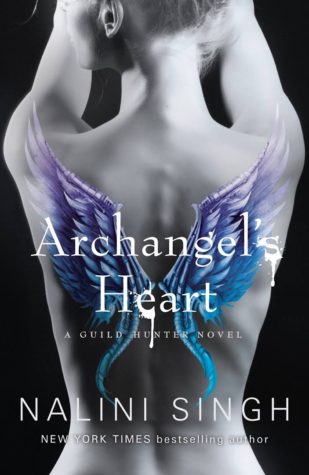 New York Times bestselling author Nalini Singh takes us into a dangerous and exhilarating world where a deadly, beautiful archangel and his once-mortal consort are caught in a fury of twisted darkness…  One of the most vicious archangels in the world has disappeared. No one knows if Lijuan is dead or has chosen to Sleep the long sleep of an immortal. But with her lands falling into chaos under a rising tide of vampiric bloodlust, a mysterious and ancient order of angels known as the Luminata calls the entire Cadre together to discuss the fate of her territory.   Accompanying her archangelic lover Raphael to the Luminata compound, guild hunter-turned-angel Elena senses that all is not as it seems. Secrets echo from within the stone walls of the compound, and the deeper Elena goes, the uglier the darkness. But neither Raphael nor Elena is ready for the brutal truths hidden within—truths that will change everything Elena thinks she knows about who she is…   Nothing will ever be the same again.

After 2 years of the events from the Archangel’s Legion.  Archangel’s heart introduces a new sector of the Angels, the Luminata. With Cadre of Ten now having 11 Archangel’s which has never been seen in the world of Guild Hunter, the world is changing and so are the Archangels. The Cascade is slowly gaining momentum and with the Luminata summoning the Cadre to deal with situation of Luijian’s making in China….things are about to get a lot more dicey. Of course nothing is at it seems, secrets and lies will be unearthed.

Raphael and Elena: I just LOVEEE them and their relationship! It has been great to see them develop over the course of the series. Their relationship in this book is adorable, filled with teasing, love, affection, passion and understanding. It’s very different from the relationship they had in book 1, it still has elements of that but it so much richer and developed now. They truly understand where the other is coming from and I always love it when Raphael teases or trolls Elena, It’s hilarious!

We find out quite a bit about Aodhan , not everything of course which I think is left for his own book. But it was great seeing more of him, he is slowly becoming the angel he is meant to be. Not the damaged/recluse angel of the seven but the mischievous friend of Illium and a powerful angel in his own right. I’d really love to read Sparkle’s book. He is in some ways very different from the other seven (I mean they are all different) but maybe it’s his personality or his artistic side or unique looks that I’m fascinated by.

The plot was pretty intriguing involving the angel group ‘Luminata’ who are set apart from the different angels seeking enlightment and the situation in China. I don’t want to give away to much but I though the plot was done pretty well but for me I think Elena and Raphael’s relationship made the book for me. I also enjoyed the glimpses of Rapheal and his mother’s Caliane relationship as well the Caliane and Alexander’s friendship.

Avoiding telling spoilers unsuccessfully -> So at one point I knew what was going to happen with what Gain was doing etc but Nalini Singh still managed to surprise me and I am so happy for Elena. I mean she has family and friends and of course Raphael but I think this thing would be really special to her.  It was just great twist and it would bring more joy to Elena.

I still sometimes can’t believe how far Elena (and Raphael) have come. Not only is she more confident in flying but as her role as his consort with how she deals with situations with her growing immortality. Elena has always been special to me (not just because I don’t usually read some couples books/series) but because of her character. It’s such a wonderful mixture of warrior, badass, vulnerable and lovable woman who developing into this amazing angel.

I also really enjoyed seeing the different facets to the different Archangels, they are all so very complex creatures with immeasurable power. So it was great to learn a few more things about each of them.