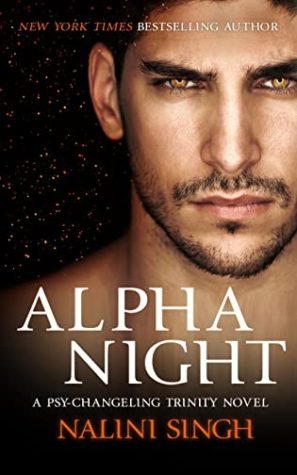 Alpha wolf Selenka Durev's devotion to her pack is equaled only by her anger at anyone who would harm those under her care. That currently includes the empaths who've flowed into her city for a symposium that is a security nightmare, a powder keg just waiting for a match.
Ethan Night is an Arrow who isn't an Arrow. Numb and disengaged from the world, he's loyal only to himself. Assigned as part of the security force at a world-first symposium, he carries a dark agenda tied to the power-hungry and murderous Consortium. Then violence erupts and Ethan finds himself crashing into the heart and soul of an alpha wolf.
Mating at first sight is a myth, a fairytale. Yet Selenka's wolf is resolute: Ethan Night, broken Arrow and a man capable of obsessive devotion, is the mate it has chosen. Even if the mating bond is full of static and not quite as it should be. Because Selenka's new mate has a terrible secret, his mind surging with a power that is a creature of madness and death . . .

An Alpha Wolf and her zaichik!

I love this series, its literally my all time favourite PNR so I’m not exactly objective but regardless of that I think Alpha Night stands really well on its own!

Ever since in Hawke’s book (kiss of snow) when he mentioned his parents mated at first sight, I’d wanted a story about that. I mean why does it happen, how does it happen because as from what we have seen, mating involves both parties willingness to fully embrace each other and be vulnerable, sometimes it takes years etc.

Selenaka Durev is the alpha of the BlackEdge wolves pack in Moscow (we’ve met her in previous books) and she’s described as ‘sexy enough to fry your brains’ and ‘she knows how to love with a ferociousness that encompasses us all’ in the Wild Woman magazine.

Ethan Night is an arrow, who isn’t entirely an arrow due to his prisoned upbringing. A Tk with a very unique ability, who has spend his life in a ‘grey fog’ disassociating from the world due to horrors inflicted on him.

Selenaka and Ethan from the moment they meet, they can’t seem to take eyes off each other, there’s just something there attraction but also something more and BOOM they are mated! This was such an interesting thing, of why it happened. I’mma leave that for you to find out. 😛

“I’m the knight to your queen” ~Ethan Night.

I loved Selenka and Ethan together, they are very different from the other couples in the series (not that any of the couples are similar) but it was from they mated to how they come together, how their relationship developed. For two very strong, dominant people they had such softness to them as well. They were adorable. Sweet, flirty and romantic.

“You have a wolf’s heart, zaichik” ~Selenka Durev.

This book could have entirely too serious. But there was humour and lightheartedness especially in the Selenka’s POV that made this work so well, otherwise it would have all despair. Nalini Singh did a great job, It has a really good balance of dark and lightness (i’m sure you’ll understand this reference later).

“You’re my always Ethan, and I wouldn’t have it any other way” ~Selenka Durev.

“I will fight always for you. Until my breath stops, I’ll fight” ~Ethan Night.

I do wish the book had been slightly longer so we could have spend more time with them together, learned a bit more about the pack etc but I’m just greedy!

We are making headway in the ARC of the trinity chapter of PsyChangeling things are escalating, PsyNet is barely holding on as the ruling collation, the arrows and Kaleb/Aden try to maintain the fabric of the Net that keeps the Psys alive. I’m kinda sacred of what’s gonna happen. The architect is really losing it though, they seem to think they are still sane even as their behaviour seems to say otherwise. Allure of power seems to be something that certain Psys are struggling with.

We also get glimpse of other characters, couples!! Also Pax, I want his book!!!!! Anyone else wants to find out more about the soap opera Hourglass lives and Aunt Rita from the Wild Woman magazine?? Just me ?

THAT ENDING THOUGH!!! I need the next book NOOOWWW!!! Overall, Alpha Night is a fantastic addition to an extremely intricate, complex and captivating series that is also beautifully written.

~this isn’t exactly a proper, proper review but eh 🤷🏻‍♀️! maybe I’ll update it once I reread.