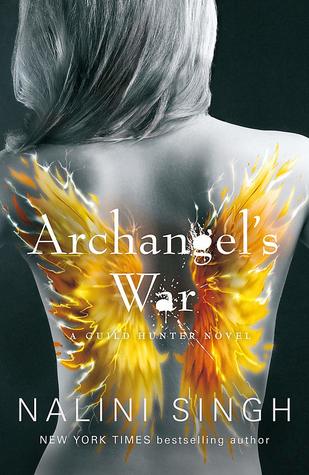 Wings of silver. Wings of blue. Mortal heart. Broken dreams. Shatter. Shatter. Shatter. A sundering. A grave. I see the end. I see. . .
The world is in chaos as the power surge of the Cascade rises to a devastating crescendo. In furiously resisting its attempts to turn Elena into a vessel for Raphael’s power, Elena and her archangel are irrevocably changed. . .far beyond the prophecy of a cursed Ancient.
At the same time, violent and eerie events around the world threaten to wipe out entire populations. And in the Archangel Lijuan’s former territory, an unnatural fog weaves through the land, leaving only a bone-chilling silence in its wake. Soon it becomes clear that even the archangels are not immune to this deadly evil. This time, even the combined power of the Cadre may not be enough. . .
This war could end them all.

I know there were mixed reviews and opinions about the last book (which I didn’t read) but I honestly enjoyed it and was eagerly waiting for Archangel’s War and it really delivered. This is the 12th book in the series, seems it just started yesterday….

Archangel’s War starts of where Archangel’s Prophecy left off and ohh boy so much happens in the book. It’s truly an epic proportions of a ride. I cannot wait to see what happens in the guild hunter world next. Nalini Singh really brought her A-game to this book and it makes more excited see what are we gonna have next in store for Elena and Raphael and his seven.

There is a huge story progression that happens in this book, we see quite a bit of the prophecies and other things that have been teased for some while come into play. And more teasing of things to come. As I write this, I’m suffering from a huge book hangover and now going to started rereading the whole series again.

I will also say, its so very interesting how the characters, the immortals who were very complex of course but also remote have come such a long way from when we met them in Angel’s Blood. There was also a very good balance of action, romance and humour and intensity in the book to stop it from being doom gloom.

ALSO ELENA AND RAPHAEL are one of my all time favourite couples, especially after these two books (this is coming from someone who doesn’t like reading series about the same couples so its a pretty big thing for me, I still want more of them). Raphael is still very much an archangel but the way he loves Elena is just amazing and their love is truly swoon worthy especially in these two past instalments. Elena of course I love her and it makes me really happy to see how far she has come from the woman who had friends but was lonely and haunted by her childhood and it’s really nice seeing a kickass heroine getting the love she deserves and seeing her been loved by Raphael and her friends/family. Also I love the legion.

That is all, can’t wait for the next book!! Wonder if [redacted] will be the one to get his book next ?? @[email protected]