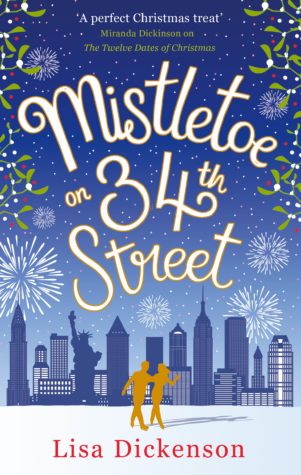 Olivia has never experienced a snow-covered, 'traditional' Christmas before. Having grown up in a family that chose winter sun over decking the halls, she's not sure what all the fuss is about. So when she and her co-workers are stranded in New York after a work trip, Olivia is perfectly happy spending the holiday season in The Big Apple.
John, Olivia's friend, on the other hand is so upset and is desperate to get home in time for his big family get-together. Nevertheless, determined to make the best out of the situation he sets out to show Olivia how enchanting Christmas in New York can be. And when she adds handsome New Yorker Elijah into the mix, could the magic of the season finally be working its charm on Olivia? As December 25th draws closer, Olivia suddenly finds herself with a decision to make: who does she really want to kiss under the mistletoe this Christmas?

Olivia along with her colleagues are stranded in New York during Christmas time where they were attending a conference. Olivia loves New York so for her being in New York especially with her friend John is no hardship. Everything of course is made difficult with her being responsible for her colleagues all with different and big personalities. Then there Elijah the New Yorker who Olivia meets on the airport and feels attracted to, complicating everything.

John who works for HeForShe campaign is also in New York. He has been Olivia’s friend for a few years now. John was great guy, I wish we gotten to know him a bit better. Every Christmas he and his family would have a big family gathering but now he is stuck in NYC far away for them, so he decides to make the best of it and show Olivia how amazing Christmas can be.

Olivia was a pretty great protagonist, she’s just a genuinely nice person with a perchance of landing herself in humours/ awkward situations. She doesn’t really feel like Christmas is anything special because in her family it isn’t so Olivia goes through a journey over the course of the book realising what Christmas is actually about.

We get to see some NYC in winter and Christmas time and those bits were pretty magical, making me wish I was in New York as well. I think the author did a great job showing NYC, the subtle friend to lovers relationship, making more friends and making Christmas special even when stranded somewhere far away from hime.

Quibbles: View Spoiler »I just felt the romance between John and Olivia could have been developed a lot more than it was. « Hide Spoiler

The book has great humour, delightful characters and making one practical girl believing in the magic of Christmas!

Lisa Dickenson is the pseudonym for Beyoncé. OK, FINE, THAT’S NOT TRUE. Lisa lives by the Devon seaside, stuffing cream teas in the gobs of anyone who comes to visit, and writing stuff down that she hopes is funny. Her first novel was the copyright-infringing Sweet Valley Twins: The Twins Holiday Horror, which she wrote in primary school and gave up on after five pages. Twenty-ish years later Lisa went on to be a *real author* and wrote the Novelicious Debut of the Year, The Twelve Dates of Christmas. In summer 2016 out popped You Had Me at Merlot. She’s now keeping her fingers crossed that everyone will like her third paperback, Mistletoe on 34th Street, and that New York City gives her a free apartment near Central Park as a ‘well done’.