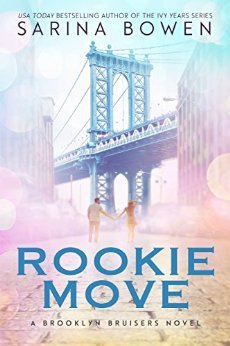 The first novel in a sexy new series featuring the hockey players of the Brooklyn Bruisers and the women who win their hearts—from the USA Today bestselling author of the Ivy Years series.   In high school they were the perfect couple—until the day Georgia left Leo in the cold...   Hockey player Leo Trevi has spent the last six years trying to do two things: get over the girl who broke his heart, and succeed in the NHL. But on the first day he’s called up to the newly franchised Brooklyn Bruisers, Leo gets checked on both sides, first by the team’s coach—who has a long simmering grudge, and then by the Bruisers’ sexy, icy publicist—his former girlfriend Georgia Worthington.   Saying goodbye to Leo was one of the hardest things Georgia ever had to do—and saying hello again isn’t much easier. Georgia is determined to keep their relationship strictly professional, but when a press conference microphone catches Leo declaring his feelings for her, things get really personal, really fast....

This was my first book by Sarina Bowen and it certainly won’t be the last.

From what I know, both the protagonists had part in other book/s from the author but this can certainly be read as a standalone since I hadn’t read any previous books and it didn’t hinder my enjoyment at all.

This was such a good read! The hero was sweet and the heroine really strong and I just really loved them together. This was one of those second chance at romance with your forever love!

Georgia Worthington is the acting PR manager of the Brooklyn Bruisers. Georgia is determined to be the permanent PR manager of the team and to do that everything has to go perfectly especially for his first press coverage. Her press day starts with her coach father and her boss arguing over the new player and ends with the new player declaring his love for her to the media.

Leo Trevi is the new player on the Brooklyn Bruisers Team. He has finally made to the NHL and thinks that everything is turning going his way when he finds out that not only is the coach his ex-girlfriends, father who he doesn’t want him in the team at all. Plus the team is not very welcoming either.

Georgia and Leo haven’t seen each other in over six years but they haven’t forgotten each other at all. I mean Leo still thinks of Georgia as his love. Georgia and Leo were high school sweethearts and they were blissfully in love but when tragedy stuck and Georgia decides to break things off with Leo thinking it was for the best, but leaving Leo confused and broken-hearted. It was obvious to anyone that both Leo and Georgia still loved each other.

Being around each other after so long brings about strong feelings of attraction and love which were never quite buried by either of them.

Leo was a great hero, open with his feelings about Georgia and I really liked that he didn’t push Georgia and gave her space when she needed and trying to understand her. He was just smitten with Georgia and it was just sigh worthy. Georgia was also great she was strong and a badass really!

This book was such a lovely happy, swoony book with slight angst to keep the reader entertained! I’d recommend this to anyone who likes sports romance and a happy slightly less angst filled romance with great characters.

Random Comments: I loved Becca, she’s very interesting and I’m intrigued by Becca and Nate. I want their book. Next up is O’Doul book so I’m excited about that as well.