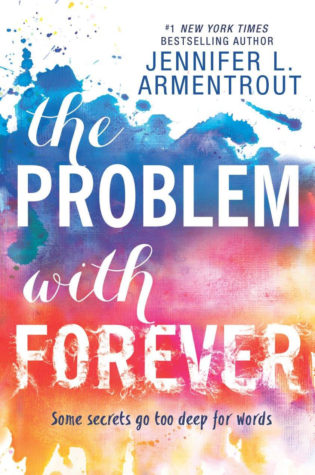 The Problem with Forever by Jennifer L. Armentrout
Published by Harlequin Teen on May 17th 2016
Genres: Coming of Age, Contemporary, New Adult, Romance
Pages: 480
Buy on Amazon US, Buy on Amazon UK, Buy on Kobo, Buy on itunes, Buy on B&N

For some people, silence is a weapon.

Growing up, she learned that the best way to survive was to say nothing. And even though it’s been four years since her nightmare ended, she’s beginning to worry that the fear that holds her back will last a lifetime.

Now, after years of homeschooling with loving adoptive parents, Mallory must face a new milestone—spending her senior year at public high school. But of all the terrifying and exhilarating scenarios she’s imagined, there’s one she never dreamed of—that she’d run into Rider Stark, the friend and protector she hasn’t seen since childhood, on her very first day.

It doesn’t take long for Mallory to realize that the connection she shared with Rider never really faded. Yet the deeper their bond grows, the more it becomes apparent that she’s not the only one grappling with lingering scars from the past. And as she watches Rider’s life spiral out of control, Mallory must make a choice between staying silent and speaking out—for the people she loves, the life she wants, and the truths that need to be heard.

From #1 New York Times bestselling author Jennifer L. Armentrout comes THE PROBLEM WITH FOREVER – a young adult title about friendship, survival, and finding your voice. This incredible book is available today! Read more about this stunning new novel below and be sure to order your copy today to receive an amazing FREE fan pack while supplies last!

The expression on her face said he gave great full frontal, and when he laughed, her pink lips split into a wide smile. Her smile transformed her from pretty to beautiful, but my attention swung away from her as tiny hairs rose all over my body. That laugh…it was deep, rich and somehow familiar. A shiver crept over my shoulders. That laugh…

He was walking backward, and I was rather amazed that he didn’t trip over anything, actually somewhat envious of that fact. And then I realized he was heading toward the last half circle. Toward me. I glanced around. There were only a few seats open, two on my left. The girl was following him. Not just following him. Touching him.

Her slim arm was extended, her hand planted in the center of his stomach, just below his chest. She bit down on her lower lip as her hand drifted farther south. Golden bangles dangling from her wrist got awful close to the worn leather belt. My cheeks heated as the boy stepped out of her reach. There was something playful about his movements, as if this dance was a daily routine for them both.

He turned at the end of the desks, stepping behind the occupied chair, and my gaze tracked up narrow hips, over the stomach the girl had touched, up and up, and then I saw his face.

My brain couldn’t perceive what I was seeing. It did not compute. I stared up at him, really saw him, saw a face that was familiar yet new to me, more mature than I remembered but still achingly beautiful. I knew him. Oh my God, I would know him anywhere, even if it had been four years and the last time I’d seen him, that last night that had been so horrible, had changed my life forever.

It was too surreal.

Now the reason why he’d popped in my head this morning made sense, because I’d seen him, but hadn’t realized it was him.

I couldn’t move, couldn’t get enough air into my lungs and couldn’t believe this was happening. My hands slipped off the desk, falling limply into my lap as he dipped into the seat next to me. His gaze was on the girl who took the seat next to him, and his profile, the strong jaw that had only been hinted at the last time I’d seen him, tilted as his eyes moved over the front of the room, across the wall-length chalkboard. He looked like he had back then, but bigger and with everything more…more defined. From the eyebrows darker than the mix of brown and black hair and thick lashes to the broad cheekbones and the slight scruff covering the curve of his jaw.

Goodness, he’d grown up in the way I’d thought he would when I was twelve and started to really look at him, to see him as a boy.

I couldn’t believe he was here. My heart was trying to claw itself out of my chest as lips—lips fuller that I remembered—tilted up, and a knot formed in my belly as the dimple formed in his right cheek. The only dimple he had. No matching set. Just one. My mind raced back through the years, and I could only think of a handful of times I’d seen him relaxed. Leaning back in the chair that seemed too small for him, he slowly turned his head toward me. Eyes that were brown with tiny flecks of gold met mine.

The easy, almost lazy smile I’d never seen on his face before froze. His lips parted and a paleness seeped under his tawny skin. Those eyes widened, the gold flecks seeming to expand. He recognized me; I had changed a lot since then, but still, recognition dawned in his features. He was moving again, leaning forward on his seat toward me. Four words roared out of the past and echoed in my head.

Register your preorder of THE PROBLEM WITH FOREVER by May 20th to receive a FREE fan pack! Includes inspirational wall art, a colorful poster, and flag-as-you-read stickers. You will also get immediate access to an extended excerpt from the book.

JUST FILL OUT THE FORM HERE

Praise for THE PROBLEM WITH FOREVER:

“The intensity between Mouse and Rider is palpably sizzling… romance aficionados [will] lose themselves in Mouse and Rider’s smoldering glances and steamy kisses.” –Kirkus

“Armentrout’s effort to gradually coax her protagonist from her shell via a supportive, loving community succeeds, and readers looking for an inspirational comeback story will find Mallory’s to be satisfying and hopeful” –Publishers Weekly