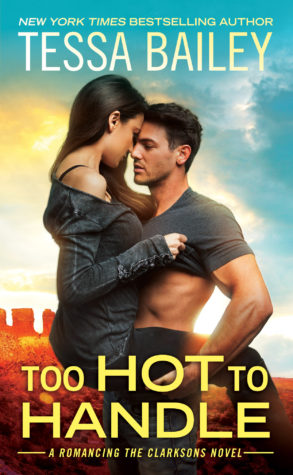 Too Hot to Handle by Tessa Bailey
Series: Romancing the Clarksons #1
Published by Forever on November 29th 2016
Genres: Contemporary, Romance
Pages: 336
Buy on Amazon US, Buy on Amazon UK, Buy on Kobo, Buy on itunes, Buy on B&N

When rescue looks like a whole lot of trouble . . .

The road trip was definitely a bad idea. Having already flambéed her culinary career beyond recognition, Rita Clarkson is now stranded in God-Knows-Where, New Mexico, with a busted-ass car and her three temperamental siblings, who she hasn’t seen in years. When rescue shows up—six-feet-plus of hot, charming sex on a motorcycle—Rita’s pretty certain she’s gone from the frying pan right into the fire . . .

Jasper Ellis has a bad boy reputation in this town, and he loathes it. The moment he sees Rita, though, Jasper knows he’s about to be sorely tempted. There’s something real between them. Something raw. And Jasper has only a few days to show Rita that he isn’t just for tonight—he’s forever.

Jasper braced a hand on the frame and leaned close to Rita, looking down at her body through the narrow separation between them. “Stop rubbing your thighs together,” he growled.
Those pointed tits started to heave up and down in a hypnotic movement, a mere centimeter from his chest. “I’m not. I’m just not used to wearing skirts.”
“I’m not used to you wearing skirts, either.”
“You’re not used to me wearing anything.” She squeezed her eyes shut. “You know what I mean by—”
“I know I’m thinking about you naked now.” Jasper backed Rita into the room, grimacing inwardly over the war raging between the ticker in his chest and the swelling below his belt. Had someone pressed his default setting button on the way across the parking lot? Or was he just so fucking into this woman he couldn’t see straight? He didn’t know. Didn’t know. So he needed to slow the hell down. But it was difficult as all get out when she was wobbling her way back toward the bed like she wanted to be fucked on it as soon as possible.
She was horny. That was the main problem here. Although, if Jasper used that defense in a court of law, a jury would send him up the river for sure. Because a truly turned-on woman was one of life’s treasures. Now, a turned-on Rita? She was the ninth wonder of the world. Her gravitational pull dragged him forward until the backs of her legs were against the mattress, until his hands were slipping up the outsides of her lithe thighs. So, yes, this was a problem. Because it went against Jasper’s nature to allow Rita to remain in such a state. Leaving her in the parking lot after their dry humping session had damn near killed him, but they wouldn’t make it through the evening if she kept looking at him like that.