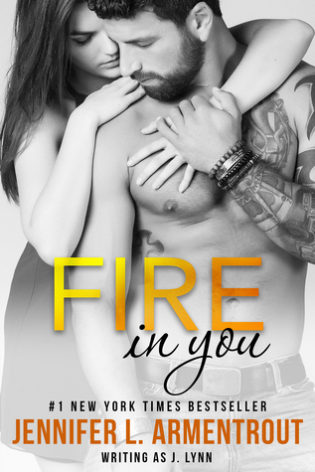 From the # 1 New York Times and International bestselling author, Jennifer L. Armentrout writing as J.Lynn, comes a richly moving story about heartbreak and guilt, second chances and hope. Full of familiar, fan-favorite characters and no two people more deserving of a happy ending, Fire In You will burn bright beyond the last page…
Jillian Lima’s whole world was destroyed in a span of a few hours. The same night her childhood love, Brock ‘the Beast’ Mitchell, broke her heart, her life was irrevocably altered by the hand of a stranger with a gun. It takes six years to slowly glue together the shattered pieces of her life, but Jillian is finally ready to stop existing in a past full of pain and regret. She takes a job at her father’s martial arts Academy and she’s going out on her first date since a failed relationship that was more yuck than yum. Jillian is determined to start living.
She just never expected Brock to be a part of her life again. But he’s firmly back in her life before she knows it, and not only is he older, he’s impossibly more handsome, more teasing and more everything. And when he sees Jillian, he’s no longer capable of thinking of her as the little girl who was his shadow growing up or the daughter of the man who gave him a second chance at life. He sees the woman who’d always been there for him, the one person who believed in him no matter what.
Brock knows she’s the one he should’ve made his, and what begins as a tentative friendship quickly turns to red-hot chemistry that sparks a flame that burns brighter than lust. Falling for Brock again risks more than her heart, because when the past sorrow-filled and guilt-ridden past resurfaces, and a web of lies threatens to rip them apart, the fallout could lay waste to everything they’ve fought to build together, and destroy the dreams of those they care most about.

Jillian Lima’s entire life changed six years ago when a gun shot led to her moving miles away from her family and no longer living but existing in a void. Losing herself was hard enough but losing her childhood best friend Brock Mitchell and the person she had loved with all her heart made it even worse. Brock has felt guilty about what happened that night since he should have been there for her like she and her family had been there for him and after that event he felt like Jillian no longer wanted him to be there. Now years after the separation, Brock is determined to get to his former best friends life.

This book is kind of mixture of second chance at love and friends to lovers. I really adored Jillian, I truly felt for her but at the same time I admired her because she goes through a lot of development in the book to be in a place where she feels happy and loved, a far cry from the woman in the first chapter.

I ended up really liking Jillian and Brock even though he drove me slightly crazy (and Jillian) with his behaviour at times. They had these moments where it was so easy to slip back into friendship that I found adorable (and I love those moments because its presents a shared history) and while it’s a slow burn its done really well and it was very satisfying to see them finally end up together.

Quibbles: I wished we had gotten even a chapter from Brock’s POV from his friendship days with Jillian /after the night because I felt like I was missing the intensity seen behind his emotions/words since from Jillian’s POV it seemed like he was an ass earlier with his behaviour and I wished there had been more grovelling involved.

The first one will *probably* always be my favourite from this series, just because their was just something very special about that one to me so it was great seeing Avery and Cam again and seeing them being so happy with their children made my heart melt.

All in all another win by J. Lynn (Jennifer Armentrout) and a great enjoyable read for anyone who’s a fan of Jennifer’s and likes new adult contemporaries with damaged leads.

New Release: Forever With You by Jennifer L. Armentrout + Giveaway