The sole remaining member of the most famous shifter hunter family in history, Owen Nightingale is a mercenary and a man with a secret held in his closely guarded heart, but when a beautiful rare shifter catches his eye and offers him a job, he has the feeling he’ll be the one paying for helping her—with his heart.

Cait is in a spot of trouble with a capital T. A male hellcat has set his sights on claiming her and she’s one kitty who doesn’t want a collar. When she meets a dark, alluring and mysterious hunter, she sees a chance to rid herself of the male, but the price Owen sets and the fierce passion that burns white-hot between them lures her dangerously under his seductive spell.

Can Owen discover the true intent of the male hellcat and stop Cait from falling into his hands? And can Cait retain control as the heat of desire burns between her and Owen, or will a reckless moment seal both of their fates forever?

Bitten by a Hellcat, the sixth book in New York Times best-seller Felicity Heaton’s hot paranormal romance series, Eternal Mates, is now available in ebook and paperback. To celebrate the release, she’s holding a FANTASTIC GIVEAWAY at her website and sharing sneak peeks of the book. This book works as a standalone, so it’s perfect for those new to the series too.

Find out how to enter the Bitten by a Hellcat international giveaway (ends March 1st) and be in with a shot of winning a $75, $50 or $25 gift certificate at her website, where you can also download a 5 chapter sample of the novel: http://www.felicityheaton.co.uk/bitten-by-a-hellcat-paranormal-romance-novel.php

Here’s more about Bitten by a Hellcat, including an excerpt from this paranormal romance book.

Would he take her job?

Owen looked back towards the person she had surreptitiously pointed out, a huge dark-haired man loitering in one of the many corners of the crowded club but not completely swathed in shadows.

His blood began a slow boil at the thought that the man had ambushed Cait just two hours ago, making her have to fight to escape and injuring her in the process. The shifter was exactly the sort of mark he had gone after countless times—a male who thought that females could be subjugated and were put on this planet for their pleasure, created to be at their beck and call.

Little more than a slave.

He narrowed his eyes on the male as the immense shifter looked at him, holding his steady gaze and showing him that he might have Cait running, but he wouldn’t get the same reaction out of him.

Owen had put down plenty of his kind.

This male would be just another misogynistic bastard to add to his tally.

He dragged his gaze back to Cait where she sat opposite him, all of her confidence gone, leaving behind a woman who looked smaller and vulnerable to him.

In need of his protection.

He had only just met her, but he didn’t like seeing her this way, the light disappeared from her eyes and all of the brightness gone from her face as she waited to hear what he would say.

“I’ll take it.” Owen offered his hand and she slipped hers into it, her palm soft against his and sending a warm thrill chasing up his arm.

He shook her hand and then released her, leaned down and swiped his black satchel from the floor. Cait’s blue eyes followed his every move and widened slightly when he removed his tablet device from his bag and flipped the cover open. He set his bag down on his lap, and the tablet on top of it, and tapped the icon that would start up the database he had created.

The basic program filled the bright screen and he tapped on the search function and selected cat shifters from the list of species. There were so many cat shifter species that he had given them their own category separate from other shifters.

While it loaded all of the shifters he had documented, Owen flagged Sherry down. If he was going to deal with jumping straight into another job, one that might be beyond his skill level, he was going to need another drink.

Sherry bounced along the length of the bar to him, her blonde ponytail swaying with each step.

“Hellfire?” she said with a smile and he grimaced and shook his head.

“Something a little less liable to kill me this time. Two vodkas, on ice. Make it the good stuff.”

Sherry nodded and left to make his drinks. The screen on his tablet changed, snagging his attention. He swiped up the screen, scrolling through all the cat shifters he had documented, pausing only long enough to pay Sherry when she returned. She set the drinks down, took his money, and disappeared along the bar.

Owen pushed one of the glasses across to Cait. Her eyes were glued to his tablet, the screen lighting her face as she leaned across, closer to him, her head at an angle.

“These are all shifters you’ve met?” She ran her gaze over the pictures he had managed to snap of the shifters in secret from a safe distance and hooked her long dark hair behind her ears, pulling it away from her face. “It says two thousand three hundred and twelve results.”

He nodded. “That’s how many cat shifters I’ve come across. Not all of them are alive now.”

She leaned away from him, a frown marring her brow. “You think he’s in there?”

He swigged his vodka and altered the parameters of the search to male and height in the six-foot-three to six-foot-six range.

The results came back quicker this time, down to only eight hundred and twenty two.

Cait looked impressed and scanned the page as he scrolled. He was almost at the bottom of the list when she jammed her finger against an entry.

“That’s him.” Her touch brought the record up and she snatched her hand back and blinked at the screen.

Owen had the impression that she didn’t get out of Hell much. “Never seen a tablet before?”

“I have,” she said, a hint of indignation in her tone. “I just haven’t touched one. I wasn’t expecting it to do that.”

He smiled as she peered closer to the device, her gaze flitting around the screen.

“You’re certain this Marius fellow is him?” Owen waited for her to nod before going back to work.

“Marius,” she murmured, still staring at the photograph on the screen. “I think I remember someone shouting that at him once.”

He double-tapped the part of the entry where it had the male down as a panther shifter and corrected it. The notes on the sources of information mentioned that eyewitnesses in a Nepal village high in the mountains in snow leopard territory had described him as a black cat. Owen had presumed he was a black panther. He probably hadn’t even considered the male could be a hellcat.

“I don’t have much on him.” But what he did have was enough to ring some warning bells in his head.

The male followed similar patterns to other fae he had tracked, travelling from one prime location for rare species to another. Nepal. Brazil. Northern India. Siberia. All places with rare cat shifters.

Owen studied Cait as she stared at the tablet.

He had a feeling she might be in serious danger but he didn’t want to spook her by telling her that the male after her probably dealt in the black market. They were both hellcats. There was an equal chance that Cait was right and Marius wanted her as a mate.

Until he had investigated the male further and had more information on him, Owen would keep his suspicions to himself.

He closed the cover of his tablet device and put it back in his bag.

“I don’t go into things blind. I need more information. I think we should go somewhere quieter to discuss the job and so you can fill me in on everything you know… maybe away from your admirer.” Owen took his drink and smiled at her, raising the glass at the same time, hoping the male was still watching them.

If luck was with him, Marius wouldn’t know who he was and would think he was just another mortal in the bar flirting with Cait. A harmless male looking for a good time.

He instantly hardened in his black jeans, his body issuing a painful reminder that it wasn’t wholly a lie. He was looking for a good time with Cait. Her flirting had revved him up, filling his head with thoughts of finding a dark corner and making out with her.

Okay, making out was a little too innocent sounding for what he had in mind, but it had been a while since he had been as attracted to someone as he was to her. Heck, he wasn’t sure he had ever been this attracted to anyone. He had always kept his dalliances short and sweet, a periodic scratching of a biological itch, but something about Cait had him firing on all cylinders and thinking in terms longer than a single hot and heavy moment.

He was thinking in terms longer than multiple hot and heavy moments. Nights were involved. Many of them. As many as she would give him.

More than they might have together when working on her job.

He emptied his glass to kill that thought with the alcohol and set it back down on the bar.

“Where do you want to go?” She sipped her drink, a genuine smile playing on her lips and the fire back in her eyes. It sent a bolt of hot lust through him again and he grimaced and shifted on his seat, trying to get more comfortable as his jeans pinched his groin.

“My place.” It came out a little harder and more demanding, and definitely more hungry than he had intended.

Bitten by a Hellcat is available from Amazon Kindle, Kobo Books, Barnes and Noble Nook, Apple iBooks stores and other retailers. Also available in paperback.

Find all the links, a fantastic 4 chapter downloadable sample of the book, and also how to enter the giveaway and be in with a shot of winning a $75, $50 or $25 gift certificate at her website: http://www.felicityheaton.co.uk/bitten-by-a-hellcat-paranormal-romance-novel.php 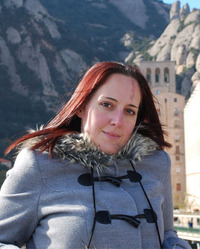 Blog barrage: Hunted by a Jaguar by Felicity Heaton + 2 Giveaways!