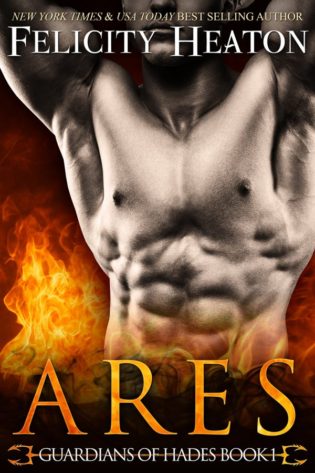 New York Times and USA Today Best-Selling Paranormal Romance Author Felicity Heaton presents:
Ares (Guardians of Hades Romance Series Book 1)Prince of the Underworld and Lord of Fire, Ares was banished from his home by his father, Hades, two centuries ago and given a new duty and purpose—to keep our world and his from colliding in a calamity foreseen by the Moirai.
Together with his six brothers, he fights to defend the gates to the Underworld from daemons bent on breaching them and gaining entrance to that forbidden land, striving to protect his home from their dark influence. Caged by the manifestation of his power, held apart from those he loves by his own fire and starved of physical contact, Ares lives a cold existence driven by duty and the desire to return to his world.
Until his world collides with a daemon who steals his power and a mortal female who shatters the ice around his heart and awakens the true fire within him—a soul-stirring passion both dangerous and seductive.
Megan has wandered far from her home, driven from everyone she loves by the devastating realisation that she is different to them all. Unsure who to trust in the world, she keeps to herself, until a fateful stormy night brings a temptingly handsome warrior crashing into her life and into her heart—a warrior who seems to hold powers more frightening and marvellous than her own.
When the New York gate comes under threat, and Ares is put to the test, will he choose his duty and regain the power he needs in order to save his world or will he choose the desires of his heart and sacrifice his fire so he can be with the woman becoming his whole world?

Ares is the first book in the guardians of Hades series, introducing gods, weird and strong demons, prophecies and oh a little bit of the apocalypse approaching fast.

Ares is the son of  Hades, he along with his brothers were sent to earth to guard the portals/gates to the underworld and after centuries of protecting this world and it’s inhabitants they long to return to his home but they can’t, not until they have done their duty. For Ares, his time on earth has been quite difficult because of his powers of fire. It makes difficult to be with people (even his brothers) when his powers can go off at any moment and touching him can burn them alive.

Megan has always been different, her healing abilities and keeping them a secret meant not living in one place longer than needed. She like Ares is lonely and craves companionship. She doesn’t know why she has these powers and till the night she meets Ares, she didn’t knew there were others like her. That night changes her version of reality and introduces to a world where there’s humans, deities and power hungry demons.

Megan and Ares end up saving each other the night they meet, the night also brings a bunch of revelations to both Ares and Megan. Working together to find out about the demon who attacked them the night they met brings them closer and the attraction they felt from the moment they met each other, burn hotter. They were good together, they were both protective of each other and their relationship was sweet, intense and caring.

Romance and the plot moves along side each other; we get to see Megan and Ares get closer to each other and learn more about each other and we also get to know more about the demon/demons, what Megan actually is and along with some fights and mystery to keep the reader entertained.

The book gave us enough information to understand the ‘world’ but didn’t overwhelm me with the information about it, it just made me more interested in the lore of the world of guardians of Hades. We also get introduced to Ares’s brothers, they are all very fascinating, they are very different to each other from how they live to how they interact with people and living in different places around the world. I’m really interested to know more about the brothers, particularly about Daimon, Keras and Esher and learn more about the Moirai.

Overall, it was a good start to a new series and I’m looking forward to what it’ll bring next. Valen’s story will be releasing in 2017.