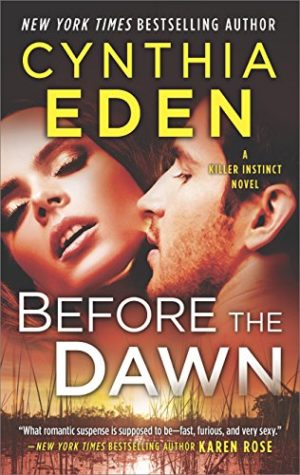 The Killer Instinct series from New York Times bestselling author Cynthia Eden continues as an FBI profiler tracks a case that resurrects ghosts from his past
Ex-SEAL Tucker Frost knows that the world is full of evil. He saw it in the face of his own brother, Jason Frost, a cold, methodical, sadistic killer. A killer Tucker put down with his own hands in order to save Jason's final victim--Dawn Alexander, the only girl who got away from the infamous "Iceman."
It's Tucker's up close and personal experience with evil that's made him perfect for Samantha Dark's experimental profiling division in the FBI. And when women start turning up murdered with the same MO used by the Iceman, Tucker is sent back to Louisiana to investigate.
Seven years have passed since the night that Tucker faced down his brother...and since he last saw Dawn, his one-time lover. But as Tucker and Dawn grapple with a desire that never died, they must also face the shared shadow from their pasts. Both have the same question--has Jason Frost come back from the dead to hunt again? And this time, will he succeed in killing the victim who got away?

As always with Cynthia Eden’s romantic suspense, this one is wild ride with evil and sadistic serial Killers, a strong woman and a possessive hero along with a story to keep you glued to your kindle.

Tucker Frost is former SEAL and currently a FBI agent and part of BAU under Samantha Dark’s command (After the Dark). He and his fellow FBI agent’s have been selected because they seem to understand serial killer’s better than other people and this is because of their past connections to one. For Tucker, it was his older brother who was a serial killer known to the public as Iceman  and had to be put down by Tucker to save the woman he loved, Dawn Alexander.

Dawn Alexander has come far from being the only surviving victim of the Iceman. She’s an accomplished PI now in New Orleans. Dawn went through a lot at the hands of Tucker’s brother but the one thing that made it worse was losing Tucker after what happened.

Seven years have passed since Tucker had to make a choice to save Dawn and now it’s seems someone is trying to copy Iceman’s style of killing and it’s happening where Dawn lives. Tucker and his partner are send to investigate and killings only escalate from there.

Tucker obviously feels a lot of guilt after his killing his brother even though he had done the right thing in stopping him, some part of him who saw only the brother who went through the same abuse as him at the hands of their father can’t help but wish he could have done something. He has spent the last few years trying to save people and keeping an eye out for Dawn, who he never really got over. Dawn hasn’t gotten over Tucker either but for her everything is little harder to deal with since Tucker looks so much like his brother.

One of the reasons why I feel that second chance romance works well with romantic suspense is because already know each other and so about equal time can be spent on the suspense and the romance (when it’s done well) and as with Cynthia, her couple have this connection and chemistry that it works out really well.

I really liked both Tucker and Dawn, they had been through quite a lot. Tucker’s childhood was brutal and Dawn’s mental and physical torture at the hands of Tucker’s brother was something Dawn had to slowly work her way through. I really liked them together, they both trusted each other and even though it had been years since they were together, they are very much still in love with each other.

The suspense part of the book is about the copycat or is it really the Iceman…who has started killing again and it seems wants to finish off where he left by killing Dawn. Everything is made more complicated when someone close to Dawn dies and accusations start flying at Tucker and Dawn.

Quibbles: View Spoiler »I do wish however that we had gotten flashbacks of younger Dawn and Tucker in love before everything went south and of course this more of my own issue but it’s was trying every time a partner, a significant other was called ‘lover’ and baby in the book. Maybe it’s because I have read a lot of books by Cynthia Eden and they all refer to their significant others the same way…. « Hide Spoiler

I quite like the plot, I thought it was done well. The action and keeping the momentum of story going with more clues and murders made me very entertaining. Even though I figured out who it was early I found it interesting how shifty some people act. The ending was extremely satisfactory!

There are so many interesting secondary characters in this book, such as Macey and Bowen, their book comes out in December which I very excited to read. There’s also Dawn’s friend Julia who is corner I hope maybe one day we can her story as well.

Overall, this was a great addition to a fantastic series by Cynthia Eden! 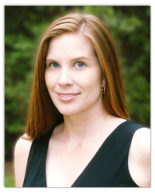 Award-winning author CYNTHIA EDEN writes dark tales of paranormal romance and romantic suspense. She is a New York Times, USA Today, Digital Book World, and IndieReader best-seller. Cynthia is also a two-time finalist for the RITA® award (she was a finalist both in the romantic suspense category and in the paranormal romance category). Since she began writing full-time in 2005, Cynthia has written over thirty novels and novellas. Cynthia lives along the Alabama Gulf Coast. She loves romance novels, horror movies, and chocolate. Her favorite hobbies include hiking in the mountains (searching for waterfalls) and spelunking.