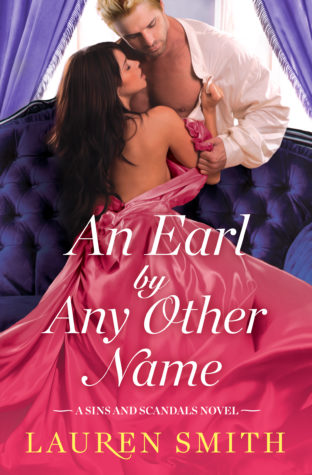 An Earl by Any Other Name by Lauren Smith
Series: Sins and Scandals Book #1
on August 1st 2017
Genres: Historical
Pages: 164
Buy on Amazon US, Buy on Amazon UK, Buy on Kobo, Buy on itunes, Buy on B&N

An earl in the streets, a rogue in the sheets . . .
Leopold Graham, Lord Hampton, was never a man to let propriety stand in the way of his pursuit of pleasure. Hedonism is his only desire in life---until his father's death saddles him with debts that threaten to bankrupt the entire family. Now the only thing that stands between him and utter ruin is marriage to a proper, and preferably wealthy, young lady.
Ivy Leighton is no sweet English rose. Perhaps it's her gypsy roots, but she would rather make a spectacle of her independent spirit than sit quietly on the sidelines. If that means that the only place she'll ever have in society is firmly on the shelf, then so be it. But when Ivy runs into the handsome, rakish Leo who's looking for a respectable, well-bred wife, she can't stop thinking about the troubles they can get into. Now she just has to convince him that a life with her is really what he needs.

Without so much as another word, he bent his head. When their mouths were an inch apart, he captured her gaze, and something wild and hot passed between them as he slanted his mouth over hers. All worries and fears were destroyed in the wake of pleasure and fire.
Heat and light burned through at that single kiss, like tender sparks shooting through the night over a healthy fire. A little moan escaped her as he teased her mouth open with his tongue. One of his hands grasped her hip, holding her firm between him and the tree as he pressed against her. The heady aroma of autumn leaves, leather, and sandalwood sent her senses spinning.
With gentle kisses and a wicked tongue, he taught her all the ways she’d longed to kiss. It was the sort of kiss the upstairs maids whispered about, the kind that made a woman lose her head…and her heart.
This is a terrible idea. I should stop him…but…The will to break the kiss faded like morning mist. Once upon a time, there had been nothing more she had wanted in her life, a kiss from her sunny-haired prince. But she’d changed; she’d grown up and a man’s kiss shouldn’t have been so potent that it cast a spell over her. Yet, Leo’s kiss was exactly that, a spell that bound her to him in a way she feared would break her heart.
He nipped her lips, and she felt his mouth curve into a smile against hers before he finally drew back. His eyes were dark with passion, and his breathing was rough and warm against her face. Their bodies were so close, the intimacy making her feel like there was nothing outside of them in that moment.
“Why do I have the feeling you are going to be trouble, Miss Leighton?” Leo chuckled, suddenly drawing a fingertip down her nose and tapping it lightly, the way he had so often all those years ago.
“Trouble?” she echoed faintly. Still shaken by her first kiss and the shivery warmth spreading through her limbs, she dared not move for fear of falling. Love was dangerous; love ruined a woman’s dreams. And Leo was the one man who could tempt her into falling in love.
“Oh yes. Just when I have everything planned, you come along and remind me of why I used to be so wicked.” He bent, feathered one last kiss to her lips before he took her arm in his and escorted her back to the house.
Ivy did not look at him. She felt changed. Their secret moment had awakened her and melted whatever defenses she’d thought she’d built against his charm. How was she ever going to think clearly when all she wanted to do was relive that kiss? The carefully crafted battlements around her heart quivered, trembled, the walls crumbling.
Oh dear…

Enter to win 1 of 15 free ebook downloads of An Earl by Any Other Name! 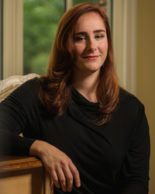 LAUREN SMITH, winner of the 2014 Historical International Digital Award, attended Oklahoma State University, where she earned a B.A. in both history and political science. Drawn to paintings and museums, Lauren is obsessed with antiques and satisfies her fascination with history by writing and exploring exotic, ancient lands. She is currently an attorney in Tulsa, Oklahoma.