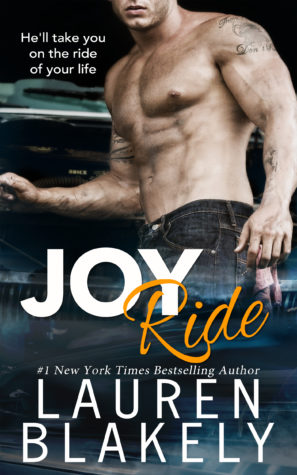 From the New York Times Bestselling author of MISTER O and BIG ROCK, comes a hot & hilarious new standalone romantic comedy…
Let’s be honest, ladies. A good man is a lot like the perfect car. You want a hot body, an engine that purrs, and superior performance under the hood. You probably also crave a ride that can go all night long.
I’m at your service.
Like the custom cars I build with class and sophistication, that’s exactly how I treat a woman. But don’t worry. I absolutely do my best work dirty…both in the shop and between the sheets. Work and play keep me plenty busy, until a certain sexy brunette reappears in my life and throws a wrench in all my plans.
This woman drives me insane. With longing. With lust. With every-damn-thing. But I kept my hands off her when I worked with her before, and I can damn well do it again now that’s she’s the competition.
After all, you don’t sleep with the enemy, even if it’d be one helluva joy ride?

Imagine what it was like working with her for one, hard-on year.

I survived the challenge because she had talent to spare. And I never treated her differently because she was a woman, or because I thought about her naked an obscene amount of the time. I treated her like anyone else—specifically, all the people I work with who I never ever imagine in anything less than full-on Siberian winter garb, complete with the thermals and Michelin Man coat.

“Black heart still intact.” I tap my sternum. “Same model as before.”

“I’d have thought you’d get an upgrade by now. Faulty parts and all.”

“No recall needed on the ticker. It works just fine in this cruel bastard.” I say, reminding her of the words she’d uttered the day she stormed out.

She arches a brow. “Shame. You should have let me replace it. I’m good at making all sorts of clunkers run better.”

Jesus Christ. She still takes no prisoners. “I’ve no doubt you have all the tools to fix anything, and if you couldn’t find the right one, you’d use a blowtorch.”

She adopts an expression of indignation. “There’s nothing wrong with using a blowtorch,” she says, taking extra time on the first syllable.

How the hell did I ever last with this woman? Before I can even fashion a comeback, she taps her toe against the tire on Wagner’s car. “I see you still like to make your cars with big, manly wheels.”

I roll my eyes then make a give it to me now motion with my hands. “All right, Henley. Deliver the punchline.”

She bats her lashes. “What punchline?”

“Big? Manly? You’re going to say it’s some sort of compensation thing going on. That’s what you always said about the guys who wanted the biggest cars with the biggest wheels.”

She smirks. “Was I wrong in my assessment?”

I laugh. “I don’t know. I didn’t check to see how that added up for them.”

“Nor did I. My focus was always on the work.”

“As well it should have been.”

“That’s what you taught me.”

“I’m glad you learned that lesson.”

“I learned so many lessons from you.”

Celebrate the release of JOY RIDE with this amazing giveaway!

The JOY RIDE giveaway is filled with: