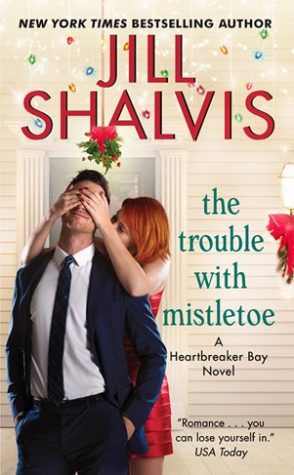 The Trouble With Mistletoe is the second in New York Times bestselling author Jill Shalvis's Heartbreaker Bay series, featuring her trademark gift for humour, warmth and romance. Perfect for fans of Jill Mansell, Debbie Macomber, Nora Roberts and Marie Force.
Is it time to give him - and love - another chance?
Willa Davis is wrangling puppies when Keane Winters stalks into her pet shop, desperate to leave his great-aunt's Feline-from-Hell in someone else's capable hands. But, despite the fact that he's sure he's never seen the drop-dead-gorgeous pet-shop owner before, she definitely seems to be mad at him...
The last thing Willa is inclined to do is rescue a guy who doesn't even remember her. Still, she can't deny that Keane's changed since high school - but can she trust him not to break her heart again? Maybe all she can do is throw a coin in the fountain, make a Christmas wish - and let the mistletoe do its work...

I enjoyed this one! This makes for a good winter read especially with Christmas and hopeful vibe it has.

I’ll start of by saying that it took me quite a few chapters to warm upto Willia (I actually think this might be the one heroine I didn’t instantly connect to by Jill Shalvis). I just felt what happened with Keane when she was younger was hurtful and painful to Willa but when I found what it was I was bit confused of why she made it seem like it such it was a huge and horrible thing . I didn’t understand this part of her that felt so angry-ish to Keane over him standing her up at freshman year ball when they had barely interacted before the ball and certainly not after? She was kind and sweet to everyone but him at the start. Anyways as chapters went by she grew on me and I ended up really liking her.

Willa Davis is a pet store owner and Keane Winters is a construction company owner . When Keane ends up having to take care of a cat named Petunia that he thinks hates his guts, he enlists Willa’s professional expertise to help him out and take care of the cat for him. From the moment Keane sees Willa, he is attracted to her too bad she seems to really dislike him for some unknown reason to him.

Taking care of Keane’s aunt’s cat and seeing him everyday, their interactions and banter along with the chemistry they have makes Willa start to question her judgement about Keane. While Keane has always been the first to run away from anything resembling a relationship, Willa is making him question his decision to not get involved with anyone.

I loved the pets in the book, I really liked Willa’s friends and I’m excited to read about Archer and Elle’s story and ofcourse Willa and Keane together were great. They slowly opened up their hearts to each other.  They came to understand and love each other.  Their relationship was sweet and adorable filled with some sexy moments. One thing you can count on in Jill Shalvis books is how developed the characters are, how well written it is and how everything is vividly described. The one had a more holiday/christmasy vibe (which I’m a sucker for really).

All in all a great and enjoying read as is the case with all Jill Shalvis Books!