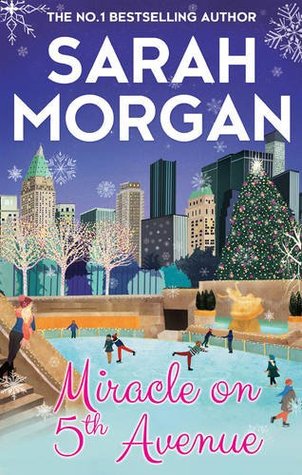 Sometimes love needs a Christmas Miracle...
‘Morgan excels in balancing the sweet and sexy to create the perfect blend.’ -Booklist
Hopeless romantic Eva Jordan loves everything about Christmas. Even if she is spending it alone housesitting a spectacular Fifth Avenue apartment. What she didn’t expect was to find the penthouse still occupied by its gorgeous–and mysterious–owner.
Bestselling crime writer Lucas Blade is having the nightmare before Christmas. With a deadline and the anniversary of his wife’s death looming, he’s isolated himself in his penthouse with only his grief for company. But when the blizzard of the century leaves Eva snowbound in his apartment, Lucas starts to open up to the magic she brings...This Christmas, is Lucas finally ready to trust that happily-ever-afters do exist?

I’ve read quite a few of Sarah Morgan’s older HQ books so I knew this was going to be good and it was! Sarah Morgan hits all the right spot for me with this one. This is the third book in the series, the series follows the three best friends who opened a event planning business. The three of them couldn’t be more different from each other. This is Eva’s story, the last one of her friends left single.

Eva Green; the adorable, very lovable and a kind hearted heroine falls for the cynical, owner of a very twisted mind and lonely Lucas Blade.

“You want true love… and I’m not Prince Charming.”

As a huge fan of mystery thrillers and romance, this was a treat because not only do we have a heroine who is embodiment of romantic nature, the hero is a mystery thriller writer whose muse turns out to be Eva.

Eva ironically the only one of her friends who believes in fairy tales and happily ever after is the one left single. Eva was a very lovely protagonist, her bluntness and awkwardness at times made me just love her more. Eva is also very lonely at the moment, the only family she ever had her grandmother died recently. Now with her friends in new relationships, she doesn’t want to trouble them with her problems. So when a job to house sit and cook for one of her favorite customers opens up, Eva takes it to escape for a few days.

Lucas is struggling to write his next book, the deadline is few weeks away and he hasn’t even started the book. Christmas time has been extremely difficult for him ever since his wife’s death few years ago. He is currently hiding in his apartment from his family who all assume he went on vacation to Vermont. So he has no idea his grandmother hired Eva to house sit for him. Lucas finds his muse in Eva and not in the way you think which was a twist I loved!

“Had she lost someone and was intent on revenge? Or was she a psychopath with no conscience or emotion, someone incapable of empathy who used her looks as a trap?”

Their first meeting is pretty hilarious, both of them are suspicious and it’s a very romantic comedy meet cute. They are both stuck in the apartment now since the weather takes a bad turn, which gives them ample opportunity to get to know each other.

Both of them are very reluctant to get involved with each other not only because of their previous relationship mishaps but also because they both think that the other is most wrong person they could be involved with but attraction and chemistry between doesn’t care about that.

I just loved how completely opposite they were in nature and how Eva made Lucas come out from his broody and emotionless hibernation. Lucas made a very interesting hero, he had this reluctant heroic side of him that I liked of course he also be a broody grump at. Eva on the other hand while a dreamer is so also a realist which made her an intriguing lead. I just liked her positive outlook on life and how she even convinced Lucas with his jaded cynic self to believe in love. I loved the humour in the book, it was a good balance to the angst. I enjoyed how their relationship progressed and the romance. Both of them when they meet are struggling to deal with the aftermath of deaths of someone they cared for so both of them go through quite a development over the period of the book.

“You want me to write happy thrillers?”
“It could be a whole new genre. It might be a big hit.

Quibbles: I do wish we had a slightly less rushed ending because I felt like it all happened all too fast near the end.

This was just a great treat which had multi-faceted characters, great banter and protagonists! It also included a bit of the festive cheer, friendship, family and love. There is going to another book in the series which I can’t wait for.

USA Today bestselling author Sarah Morgan writes contemporary romance and her trademark humour and sensuality have gained her fans across the globe.

Described as ‘a magician with words’ by RT Book Reviews, she has been nominated four years in succession for the prestigious RITA© Award from the Romance Writers of America and won the award twice; in 2012 for her book ‘Doukakis’s Apprentice’ and 2013 for ‘A Night of No Return’. She also won the RT Reviewers’ Choice Award in 2012 and has made numerous appearances in their ‘Top Pick’ slot.

Sarah lives near London with her husband and children, and when she isn’t reading or writing she loves being outdoors, preferably on vacation so she can forget the house needs tidying.

Review and Giveaway: The Christmas Sister by Sarah Morgan