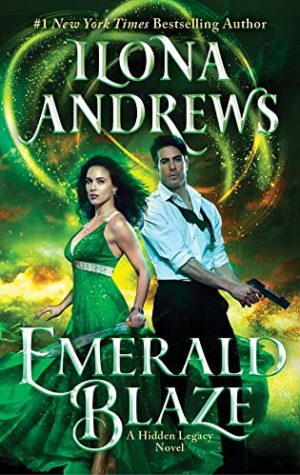 Ilona Andrews, #1 New York Times bestselling author, continues her spellbinding series set in the Hidden Legacy world where magic controls everything…except the hearts of those who wield it.

As Prime magic users, Catalina Baylor and her sisters have extraordinary powers—powers their ruthless grandmother would love to control. Catalina can earn her family some protection working as deputy to the Warden of Texas, overseeing breaches of magic law in the state, but that has risks as well. When House Baylor is under attack and monsters haunt her every step, Catalina is forced to rely on handsome, dangerous Alessandro Sagredo, the Prime who crushed her heart.

The nightmare that Alessandro has fought since childhood has come roaring back to life, but now Catalina is under threat. Not even his lifelong quest for revenge will stop him from keeping her safe, even if every battle could be his last. Because Catalina won't rest until she stops the use of the illicit, power-granting serum that's tearing their world apart.

Emerald Blaze is the second book with Catalina Baylor as lead and the fifth book in the Hidden Legacy series. It picks up six months after the events of Sapphire Flames, Catalina is settling in her role as Head of House Baylor. She’s becoming more assertive, a leader and a fighter. She’s less shy and both her duties as the Deputy Warden and under the guide of her sociopathic grandmother have helped her in this transformation.

The current case given to her by Linus Duncan, brings Prime Alessandro Sagredo back into her life. The Italian count, jack of all trades and wearer of many faces is there on behest of their client. The father of a murdered Prime involved in the reclaiming of the Pit (flooded area, mentioned in previous books). The past six months have also had an effect on him, he’s different.

I loved the case in Emerald Blaze, it was very interesting not to mention we finally get more information about the world of Primes and how the constructs are made. It reminded of robot invasion with minds of their own or humanoid robots. Anyways we see more of Catalina fighting, her growing powers and the development of her relationship with Alessandro. I liked them together!

Secondary plot includes the man Alessandro is after which connects with the case Catalina is working on. We also get to meet different primes, I’mma just say I want more of Stephen Jiang!!!! I also enjoyed knowing more about Alessandro’s past and whole action and battles we get with the primes. We also get cameos of other series favourites and my loves Neveda and Mad Rogan are also here.

This book actually made most of the my issues with the last book work, we finally get answers of why Neveda out of the blue decided to just give up being the Head of House Baylor in Sapphire Flames. It had felt bizarre to me especially because she had spent the last three book doing everything for her family. Alessandro is actually a lot better in this book, more grown up I guess. I liked him in Emerald Blaze. Also there is a lot more openness in him, which helped with developing Catalina and his relationship. Because in the last book, I was very much like why are you in love with him so soon? teen infatuation aside and are willing to give up so much for him. He is definitely all in now!

I still find him randomly interrupting Catalina annoying though whether its during talking or during fighting, let the woman do her thing without butting in.

Quibbles: View Spoiler »One of the main issues I had with the last book was Catalina as a teen, young women in the first three is shy, smart, loyal but also a fighter. In the last book though narrative/POV wise, especially because I often reread a series before reading the new release, you really couldn’t tell she wasn’t Neveda?? It was weird to me, even the gun bullet counting thing. I’d often forgot she wasn’t Neveda because you can’t tell otherwise. I think probably didn’t help that she often described things like Neveda (this is more because the authors are doing so) and if not for Catalina being dreamy eyes almost all the time when with Alessandro and the few glimpses of her backstory it was like reading Neveda again. I still had that issue in this, here its actually more complex because she shed even more of her shyness and is even more of a fighter and the Head of House Baylor. Which is understandable because of the experiences she’s going through/has gone through but it just contributes to more of a lack of distinction between the sisters who couldn’t have been more different (and something I’d being looking forward to) she’s becoming like Neveda (which there is nothing wrong with cause I love Neveda) but it was the only thing that separates them really is her fighting with knives (which I’m thankful for), her powers and her love for Alessandro. I try to justify this by thinking that Catalina probably saw her sister behaving this way and that way during investigations etc but at least in the earlier books, the sisters rarely if ever accompanied her so….

I do hope in the next book we get resolution of Ceaser and the Arkan plot, because its 5 books in and Ceaser plot has been put to back burner, if Arabella gets her own trilogy (which I do want) I hope that these two plot get solved before we get to her, though it might be that it gets picked up on her trilogy instead.

We do get an answer of why Neveda did what she did, and I’m probably in the minority here but that whole scene was like lets give an explanation except why would Victoria really tell Catalina all this, to torture her, gloat sure, provide her with the way to do it again (which felt like a very weak excuse) anyways it makes Catalina love her sister even more which I thought would be something that Vistoria would be against. But who knows…

I feel like with this series, because perhaps world building wasn’t as prominent in the first three to we are constantly getting newer information which is good but this  brings me to its said in Emerald Blaze that Osiris serum was a result of Flu pandemic, this is something that is not mentioned in any of the previous books and in the first book its actually said this was given to soldiers to make them more deadly and rich people etc etc which is different to what Catalina says…which I found interesting but at the same time confused as to why it had not been mentioned before. It something small but it bugged me and probably I’m overthinking this and it might be just an addition due to covid.  « Hide Spoiler

Ahem that whole essay aside, I very much did enjoy this one! Overall, a great addition to the series. It has action, romance, battles, little bit of angst, prime politics/shenanigans and family. Not sure what will happen next, since there are quite a few threats looming. Also wanted Victoria away from the baby! I was like nooo when I read that bit. I’m pretty excited for next one!