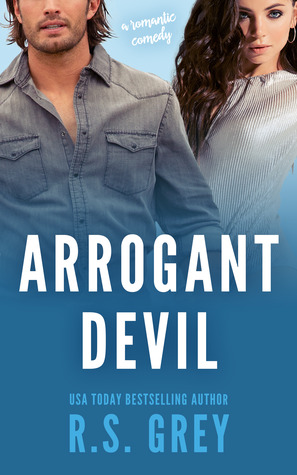 Everyone in Cedar Creek, Texas, knows Jack McNight is an arrogant devil. Physically, I get it: he’s tan and fit, with coal-black hair that’s clearly been scorched by hellfire. Oh, and his personality? It burns just as hot.
When I show up on the doorstep of Blue Stone Ranch, I’m run-down and rockin’ my last pair of underwear. I’m hoping for a savior, but instead, I find him.
My opinion of Jack is marred by a dismal first impression, but his opinion of me is tainted even before I arrive. He’s heard I’m a spoiled princess there to take advantage of his goodwill. To him, I’m more trouble than I’m worth.
Our button-pushing banter should get under my skin. His arrogance should be a major turn-off. Problem is, devils are known to offer their own form of temptation.
Every one of his steely glares sends a shiver down my spine.
Every steamy encounter leaves me reeling.
Sure, it could be the Texas heat messing with my head, but there’s no way I’ll survive the summer without silencing him with a kiss and wrestling him out of those Wranglers.
Who knows…going to bed with the devil might just be the salvation I’ve been looking for all along.

Meredith Avery one night decides enough is enough and just with the clothes on her back leaves her abusive husband behind. Meredith married very young, her husband for all intents and purposes to the outside world is the perfect husband and they have a perfect marriage. Her family, friends, especially her sister think she’s some spoiled pampered princess which is far from the truth.

Jack McNight is the owner of the Blue Stone Ranch, from a young age he had taken a huge responsibility and started to withdraw from everyone but his grandmother. His ranchers fear him, he is extremely arrogant, and once he decides something its difficult for him to change his mind. Helen (Meredith’s sister who’s on holiday with her husband) is his assistant so when she tell him about employing her spoiled sister and he’s immediately against it.

From their first meeting Meredith and Jack are combustible together, both seem to lose their calm in the presence of the other. Their relationship is of reluctant acceptance of the others existence. Jack goes out of his to create extra huddles for Meredith who has never worked before let alone as a housekeeper. Though he doesn’t know that Meredith is a survivor and she’s not going to simply give up. I really liked them together, they were like water and oil. AND I happen to love enemies/hate to love stories and this is a great one. You get slowly see them realise that maybe they were wrong about each other especially Jack and get closer. They had great banter and chemistry, reluctant on both sides but maybe that is why it was more enjoyable. As their relationship develops you get to see more sweet and adorable moments along with great funny ones.

I loved Meredith!! Even though she had never done the stuff she now had to do as a housekeeper in a ranch, she did it. She had a rough marriage and surviving with the confidence (the one she displayed to others but didn’t feel) took a lot of courage and says a lot about her character. She was funny, adorable and very easy to love.

Jack on the other hand starts off as a very arrogant man, who seems to really hate Meredith’s guts but we get to see why he’s a loner and see slowly start to change due to Meredith’s influence. He starts to see who Meredith really is and stop his deloparable behaviour to her instead actually decides to become one of her ‘people’ *Swoon*. I mean’s he’s still arrogant at the end but you know not an a** that he was at the start.

The book is very funny, has a adorable dog, has a woman trying to overcome her problems and become her own person. Along with falling in love with a person who wouldn’t try to change her!!

Quibbles: View Spoiler »One of my main issues that took some time for me to overcome was it’s not mentioned in the blurb that she’s married, so it was quite a bit of shock to open the first page and be like ??? wait what ??? Secondly, I really didn’t care for Meredith’s sister. I could understand that she don’t know any better but to say such things without ever actually listening to Meredith made me unhappy, not to mention she only comes around because she finds about Meredith’s abusive husband by someone else so… « Hide Spoiler

Overall, I really enjoyed this one and I’ve read some R.S Grey books before but I think this might be my favourite!! It’s just written in a rom-com way but with more depth and an extremely satisfying romance *happy sigh*.

Review: Love the One You Hate by R.S. Grey