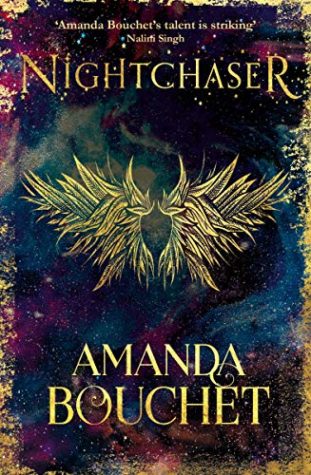 Tess Bailey: the galaxy's Most Wanted.Captain Tess Bailey is in deep trouble. She and her crew are on the run, pursued by a tyrant who'll take them dead or alive. Tess's best hope is a tall, dark, and much-too-appealing stranger, Shade Ganavan, who says he can help her. But his motivations are far from clear...
Shade Ganavan: arrogance, charm...and that special something that makes you want to kick him.With the dreaded Dark Watch closing in, what Tess and Shade don't know about each other might get them killed...unless they can set aside their differences and learn to trust each other before it's too late.

This book had somehow slipped my mind, I remember being very excited about it last year when it was announced that Amanda Bouchet would be writing more fantasy. I previously really liked her kingmaker chronicles so I was looking forward to this a lot!!

Captain Tess Bailey of the spaceship Endeavour and her crew of rebels (see robin hood-esque thieves) are on the run from overseer’s military after stealing some precious cargo. They escape with a damaged ship to another planet. As with criminals, they’re hiding and now with the ship damaged and a bounty on Tess they have to lay low for a while. They end up on the planet in another universe where they meet Shade Ganavan.

Shade is a man of mystery, with his own secrets to hide and conflicts he faces with the situation he now finds himself in. Shade is the one whose helping with the repairing of the ship but he has his own agendas which are now being coloured by his attraction towards Tess. Will Shade and Tess be able to work together, especially when they are both hiding things from each other, trust is a bit difficult to gain and give when you have both things of impense importance to hide and your own future is in peril.

The book has a blend of action, romance but also friendship, adventure and a dash of family drama and trauma. The romance is a slow burn, which builds up the anticipation. Not only are her protagonists multifaceted but so are her secondary characters, which really helps the reader connect more with the story and become invested in these characters (like Jax and Fiona). I also really liked Tess and Shade individually and together. They had good chemistry. They are very interesting characters, Tess especially her personality makes her instantly likeable while Shade with his grumpy/asshole self isn’t too far off either.

The world building is pretty great (as expected really), it was done well without overwhelming the reader with too much information. I haven’t talked about it but the government/dictatorship aspect in this book is also interesting and I want to see the overseer overthrown and his oppression on the planets ended.

Quibbles: There were certain things within Tess’s characteristics that were said to be one thing but showed another. Also there were some pacing issues and certain elements in plots were mentioned but then sort of just dropped. Maybe I had too high expectations based on the last trilogy by the author, regardless I hope that the next book will show the promise this book suggests.

Overall, despite my issue I think the series shows promise, I did enjoy the book and anyone looking to start a new sci fi with romance series should definitely give this a go (also try the Kingmaker Trilogy). And I can’t wait for the next book in the series!!! Which is called Starbreaker releasing next April.