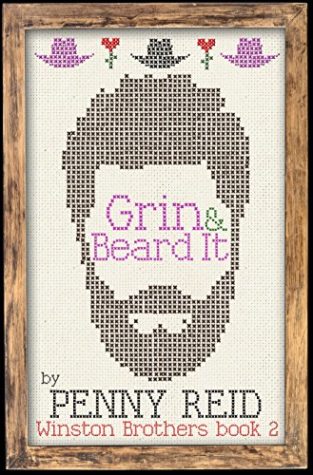 Grin and Beard It by Penny Reid
Series: Winston Brothers #2
Published by Cipher-Naught on May 31, 2016
Genres: Contemporary, Romance, Romantic Comedy
Format: eARC
Source: the Author
Buy on Amazon US, Buy on Amazon UK, Buy on Kobo, Buy on itunes, Buy on B&N

Sienna Diaz is everyone’s favorite “fat” funny lady. The movie studio executives can’t explain it, but her films are out-grossing all the fit and trim headliners and Hollywood’s most beautiful elite. The simple truth is, everyone loves plus-sized Sienna.
But she has a problem, she can’t read maps and her sense of direction is almost as bad as her comedic timing is stellar. Therefore, when Sienna’s latest starring role takes her to the Great Smoky Mountains National Park she finds herself continually lost while trying to navigate the backroads of Green Valley, Tennessee. Much to her consternation, Sienna’s most frequent savior is a ridiculously handsome, charming, and cheeky Park Ranger by the name of Jethro Winston.
Sienna is accustomed to high levels of man-handsome, so it’s not Jethro’s chiseled features or his perfect physique that make Sienna stutter. It’s his southern charm. And gentlemanly manners. And habit of looking at her too long and too often.
Sienna has successfully navigated the labyrinth of Hollywood heart-throbs. But can she traverse the tenuous trails of Tennessee without losing her head? Or worse, her heart?

Sienna Diaz is an actor, a comedian and a writer. She also has very bad sense of direction (it matches mine really). She’s also impulsive and a workaholic in need of a break.

Jethro Winston is the oldest of the Winston. He let down his family in the past and messed up but who is now reformed man and even after years is trying to be a better man for his family. In the past few years he has become serious and thoughtful about not hurting more people.

Sienna is hilarious. From the first moment we meet her when she trying to get to the cabin she would be living while she’s shooting the film. She’s adorable, has an infectious personality and her banter with Jethro was fun to read. Sienna and Jethro had such an fun relationship. This is the book about two charmers, from their first scene when they are both start flirting each other with such palpable chemistry is just an awesome thing to read. All of their banter and flirting made me smile, it was just so easy to like them as a couple and they are just prefect for each other. I just loved them together they had a very easy, natural relationship.

Both of them are not looking for a relationship. They are both also guarded because of past relationships (in sienna’s case) and the past (both in Jethro’s case). Jethro’s family may have forgiven him but he hasn’t forgiven himself. He is still trying to make amends. They both have some hang ups and issues which get dealt with nicely. From the moment Jethro sees, talks and spends some time with her, he is goner. It was sweet at the same time it was like buddy you have no idea what’s coming i.e sienna the hurricane.

Falling for her had been like breathing. Natural, easy, necessary. inescapable. ~ Jethro Winston.

The brothers were as always amusing and entertaining. I can’t imagine living with so many brothers I only have one and he drives me crazy at times… my dad had five brothers and one sister and it’s always fun to hear their stories as is the case in this book.

This is such a feel good kind of story. It has comedy, romance, family banter/angst along with a dash drama to keep the reader interested. The conflict/drama doesn’t much of the book. So there is more focus on the couple and the protagonists which I really liked. It left me smiling.

Also I really really want Cletus book now NEED IT!!. Also billy’s cause what is going on between him and Jethro’s best friend.

He also hatched maniacal plans of revenge against anyone who crossed him. Beau and I often considered giving Cletus a hairless cast as a present, so his James Bond supervillain image would be complete. ~Jethro about Cletus