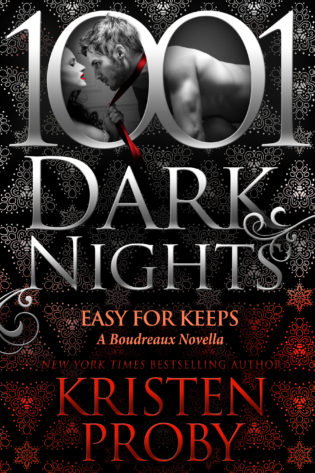 Adam Spencer loves women. All women. Every shape and size, regardless of hair or eye color, religion or race, he simply enjoys them all. Meeting more than his fair share as the manager and head bartender of The Odyssey, a hot spot in the heart of New Orleans’ French Quarter, Adam’s comfortable with his lifestyle, and sees no reason to change it. A wife and kids, plus the white picket fence are not in the cards for this confirmed bachelor. Until a beautiful woman, and her sweet princess, literally knock him on his ass.

Sarah Cox has just moved to New Orleans, having accepted a position as a social worker specializing in at-risk women and children. It’s a demanding, sometimes dangerous job, but Sarah is no shy wallflower. She can handle just about anything that comes at her, even the attentions of one sexy Adam Spencer. Just because he’s charmed her daughter, making her think of magical kingdoms with happily ever after, doesn’t mean that Sarah believes in fairy tales. But the more time she spends with the enchanting man, the more he begins to sway her into believing in forever.

Even so, when Sarah’s job becomes more dangerous than any of them bargained for, will she be ripped from Adam’s life forever?

The next afternoon, I’m stocking bottled beer behind the bar, lost in thought. At this time of day, business is slow, so my mind wanders.
And lately, it’s been wandering to a certain beautiful brunette.
“Why are you so chipper?”
My head whirls around at Callie’s voice. “I’m not chipper.”
“You’re whistling,” she says with a laugh and grabs a wet rag to wipe down the already clean bar. “You’re happy about something.”
“Why shouldn’t I be happy?” I counter and toss the empty crate to the side of the bar. “We have a great business and it’s a beautiful day.”
“And you’ve been spending a lot of time with a certain woman,” she says and raises a brow in my direction.
“Truth,” I reply and smile.
“She’s pretty,” Callie says thoughtfully. “And you said she has a child?”
“Yes, Hailey. She’s five.”
“How long has Sarah been divorced?”
I frown. “She’s not. She’s widowed.”
“Oh.” Callie frowns and looks down at the bar and then back at me. “I’m sorry to hear that.”
“Yeah. He was a cop, killed in the line of duty.”
“That’s horrible.” She leans on the bar and crosses her arms over her chest, watching me.
It’s not that I’ve been keeping Sarah and Hailey a secret. Not at all. I’ve been consumed by them. When I’m not here, I’m with them, and Callie has been in Nashville with her husband, Declan, while he produced a new album for a country singer.
I glance up to find her still staring at me.
“What?” I demand.
“You probably don’t want to hear this.”
“That’s never stopped you before,” I reply. “What’s on your mind?”
“You’d better not hurt her,” Callie says sternly. “Seriously, Adam, she’s…fragile.”
“B*llshit.” I pace away, then turn back and brace my hands on my hips. “She’s not weak, Callie. She’s one of the strongest people I’ve ever met.”


And don’t forget to grab the first three books in the Boudreaux Series!

Preorder the 4th full-length novel in the Boudreaux Series here!