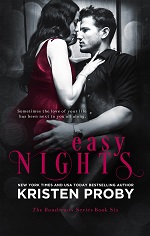 No one said change was easy…

Savannah Boudreaux knows what it is to hurt. To bleed. To be afraid that the man she’s promised to be true to until “death do us part” might in fact separate them far sooner than anyone had ever anticipated. But Van also knows what it is to survive. To move on. To live life to the fullest. With five brothers and sisters and a loving mother as her constant source of strength during the pain and the healing, Van realizes there is little else she needs.

But some things never change…

Benjamin Preston sat on the sidelines of the Boudreaux family for years, in love with a woman he couldn’t have. As the best friend of the Boudreaux brothers since childhood, Ben has seen both tragedies and joys in the family. And as a former MMA fighter and Krav Maga expert, Ben’s used to fighting for what he wants—and winning. His hands were tied when Savannah married her high school sweetheart not long after graduation, but now two years have passed since Ben found Savannah broken in her own home.

Van’s convinced that happiness isn’t in the cards for her, no matter how right it feels to be in Ben’s strong arms—and his bed. Ben is determined to win her heart and fight for her trust. He’s promised to protect her, to be her friend. But more than anything, he wants to finally make her his, and this is one fight he’s not willing to lose.

We turn a corner and there it is, my favorite tree. It’s at least four hundred years old, with branches so big and heavy that they rest on the ground.

And under it is a portable swing with a red blanket spread in front of it.

He smiles down at me and leads me to the swing. I sit and kick my flip flops off, and Ben sets the basket in the middle of the blanket and joins me on the swing.

“It’s a good day for it,” he says and rests his arm on the back of the swing, behind my shoulders. His fingertips brush the bare skin on my shoulder. I scoot closer to him and rest my head on his shoulder.

“We spent countless summers out here,” he says quietly, as if speaking too loud will disrupt the perfect spring day.

“And as a teenager, I would see you sitting out here, under this tree, with a book. Your knees pulled up to your chest, and your bare feet dirty as can be. You took my breath away even then.”

I glance up at him in surprise.

“I can’t tell you how often I’d watch you—not in a creepy way, I might add—I’d watch you reading and enjoying this tree, and I wanted so badly to sit with you and kiss you senseless.”

“Of course you didn’t,” he says with a gentle smile. “But now you do.”

He nudges my chin up with his fingers and lowers his lips to mine, covering them softly. I cup his face in my hand and let myself simply soak in the moment, in my favorite place, with this man.

He slowly takes the kiss from sweet to hot, and to my delight, drags his hand from my hip to my breast, his thumb dancing over my already tight nipple.

Good God, he’s like a drug that I’ll never get tired of.

After what seems like an hour, he pulls back and rests his forehead against mine.

“I have been waiting for that for a very long time,” he whispers.

“I think this was probably way better than anything you might have done as a teenager.”

I let my fingertips glide down his cheeks to his neck.

“I want you,” he says and closes his eyes tightly. “I don’t say that to rush you into anything, and this isn’t the time or place anyway, but I need you to know that I want you.”

I cover his lips with mine, watching his eyes. “I want you too, Ben.”

He inhales and kisses me again, moving straight into hot as fuck.

Finally, he pulls back, clears his throat, and smiles at me.

I laugh and push my hair off my face. “So hungry.”

“I think Gabby made fried chicken.”

“That sounds good too.”