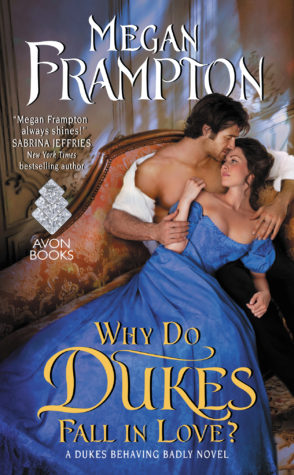 Why Do Dukes Fall in Love? by Megan Frampton
Published by Avon on July 26th 2016
Genres: Historical, Romance, Victorian
Pages: 400
Format: eARC
Source: the publisher
Buy on Amazon US, Buy on Amazon UK, Buy on itunes, Buy on B&N, Buy on Amazon

In Megan Frampton’s captivating new Dukes Behaving Badly novel, we learn the answer to the question:
Why do dukes fall in love?
Michael, the Duke of Hadlow, has the liberty of enjoying an indiscretion . . . or several. But when it comes time for him to take a proper bride, he ultimately realizes he wants only one woman: Edwina Cheltam. He’d hired her as his secretary, only to quickly discover she was sensuous and intelligent.
They embark on a passionate affair, and when she breaks it off, he accepts her decision as the logical one . . . but only at first. Then he decides to pursue her.
Michael is brilliant, single-minded, and utterly indifferent to being the talk of the ton. It’s even said his only true friend is his dog. Edwina had begged him to marry someone appropriate–—someone aristocratic . . . someone high-born . . . someone else. But the only thing more persuasive than a duke intent on seduction is one who has fallen irrevocably in love.

I really enjoyed this one! *dreamy sigh*

Duke of Hadlow, Michael has no time for stupid people. All he wants is an efficient sectary to help him as he handles his ever growing business and wealth. He is very intelligent, analytical and would really like it if people were to follow logic as he does. He is in today’s terms socially awkward and ofcourse his abruptness doesn’t help him make any friends.

Edwina Cheltam, now a widow and single mother worked really hard to make money for her husband’s business only to end up him giving his bother everything and leaving her and their daughter with nothing after he dies. She needs a job to take care of her daughter and find herself becoming the sectary to the Duke.

Michael finds Edwina enchanting; not only is she is beautiful, she’s intelligent and more than capable of putting him in his place or reminding him of manners. Edwina on the other hand thought she was done with men after her husband’s death, come of to think of it she was probably done with men while being married. Finding her boss fascinating wasn’t in the plans to make a better future for herself and her daughter.

Their relationship is honest, they both know that it can’t go anywhere but neither is the attraction they both seem to have not only for each others bodies but also each other’s mind and behaviour. I loved the contrast between two highly intelligent individuals who were so different from each other, one is a grumpy, arrogant and very ducal (Michael) and the other is the caring, independent and sassy (Edwina). They made a wonderful couple, however for two extremely intelligent people they have a hard time telling each other about their feelings.

Quibbles:I would have liked a bit more of how Michael grew up and how his childhood made him into the man he is today. And because the story progress really fast after Michael and Edwina come back from their trips we didn’t get to see more of them being a ‘couple’ which I would have liked to see.

I really loved the banter between Michael and Edwina. Michael only finding the Cheltam women worth his time and energy. I loved his interactions with Edwina’s daughter Gertrude and ofcourse Michael’s best friend his dog, Chester. I also loved the Why do Dukes fall in love reasonings, I found them adorable. Here’s a few that I loved:

66. Because even a duke is powerless when it comes to the heart.

60. Because if they didn’t, they would be very grouchy. And grouchy dukes are even more impossible than regular ones.

39. Because they can only talk to their dig for so long before getting frustrated at the lack of response.

This one was just plain fun. Who doesn’t want to watch a grumpy, arrogant Duke fall in love??