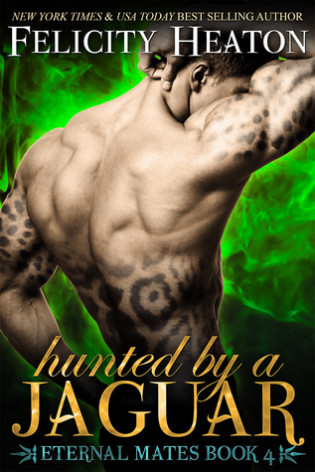 Kyter is a half breed with a really strong jaguar side. He is the owner of the nightclub ‘Underworld’, first introduced in the Eternal Mates Book 1. His mother recent death has left him with just one motive to get revenge for her murder from the man responsible, who just happens to his demonic father. For which he needs the artifact.

Iolanthe is an elf. She is a mercenary, she finds various objects from different dimensions. She is also related to someone we love and would love to see in love View Spoiler »*cough blue cough*. I knew it from the moment she said she had a brother. « Hide Spoiler Now she has to find a special artifact for a powerful demon or lose her head.

Iolanthe was a strong, independent woman and a skilled warrior. She doesn’t want a mate especially she after being on her own for thousand’s of years.

Kyter and Iolanthe had great chemistry. I think they were good together. Their relationship starts off as adversaries as they are both looking for an artifact for reason which are equally important to them both which made for witty banter and slowly turns into more since the pushy cat doesn’t leave her alone.

The book had a quite a few funny scenes (especially when Kyter finds out who Blue is to Iolanthe) , some sexy time, suspense and battles.  It also had cameo’s from some of my favorite characters from Felicity’s other series as well characters from the previous books in this series.

Overall, this was a great addition to the eternal mates series, I’m really enjoying it and cannot wait for the next book in the series. I also would really like to know what’s the deal with that one particular vampire.He seems very interesting or maybe I just find psychos/blood thirsty interesting. Happy Reading!

Blog Barrage: Bitten by a Hellcat by Felicity Heaton