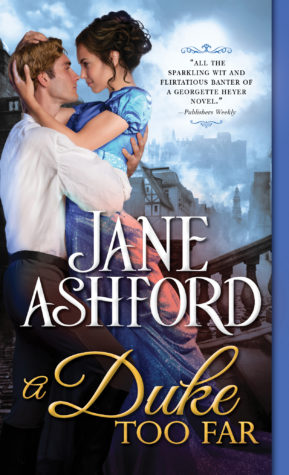 Secrets to reveal, legends to unravel, and a love to fight for...
Peter Rathbone, Duke of Compton, is already struggling to handle the responsibilities of his family home and his grief over his sister, Delia's death when he's astonished by an unexpected visitor. Life is about to get even more complicated.
Miss Ada Grandison is desperate to throw off haunting memories, and she's sure the duke can help her find answers to the questions her friend, Delia, left behind. She brings a note that Delia claimed would change everything for the Rathbone family. Peter can't quite bring himself to believe the legends he's heard all his life, but something about Ada inspires him to hope.

Check out the Excerpt and giveaway of the new release by Jane Ashford, A Duke Too Far!