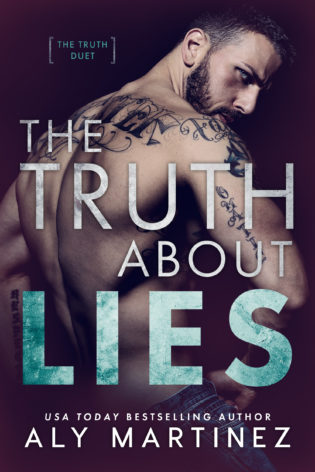 Truth: From over a thousand miles away, I watched on the screen of my phone as two men murdered my wife. And I was helpless to save her.
Consumed by hate and rage, I spent four years running from my memories.
Until a shattered woman gave me a reason to stop.
Cora lived in a nightmare, but through sheer force of will, she’d turned it into something beautiful. She had a smile that could pierce the darkest soul. And with one glance, she shredded mine.
Lie: I was only there for a fresh start.Lie: I had no idea what I was getting myself into.Lie: There was nothing I could do to save her, either.
But that’s the thing about lies—you never know who to believe.

Today we are celebrating the release of the first book in The Truth Duet by Aly Martinez. The Truth About Lies is now live and on sale for just $2.99 for today only! The second title in the duet, The Truth About Us, will be releasing on September 13th! You can pre-order it from Amazon now.

PURCHASE THE TRUTH ABOUT LIES NOW:

Add THE TRUTH ABOUT LIES (The Truth Duet, #1) to Goodreads

Add THE TRUTH ABOUT US (The Truth Duet, #2) to Goodreads

Want to pre-order the next book in the duet?

Blog Tour: The Truth About Us by Aly Martinez

Cover Reveal: The Truth About Lies by Aly Martinez