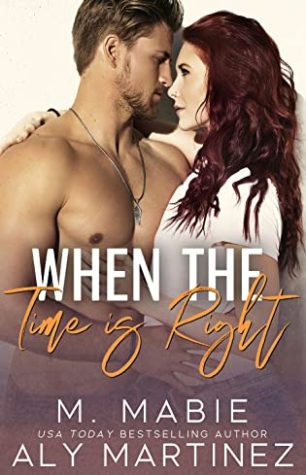 Fate doesn’t always happen overnight.
Hudson Bradley is the cockiest, most stubborn, hard-headed man I’ve ever known. And for fifteen years, he’s been my brother's best friend.
But lately, what I’m feeling for him isn’t friendship at all.
Why is my heart racing every time his blue eyes lock on mine?Why does every word he rumbles in my ear make my body come alive?And worst of all, why did I bet him that I could find a woman he and his son would both love?
If I hadn’t given up on love altogether, Hudson would have been perfect for me. After all, he was there the day my world fell apart. He’s spent the last six years piecing me back together.
There are a million reasons why we could never work, but after a single kiss, I can’t remember any of them.
Now that the time is right, I have to make him mine—before I lose him forever.

When the Time is Right is set in the same world as When the Walls Come Down, in fact the heroine works for the couple from that book.

Alexis ‘Lex’ Lawson suffered a big loss 6 years ago, at the age of 22, her fiancé died and Lex was lost for a period of time. After which she became a mother to 2 cats, doesn’t really care for for finding or falling in love again. Hudson Bradley is Lex’s brother Cal’s best friend. Hudson shares custody of his son with their mutual friend, Lauren. Hudson like Lex hasn’t really made an effort to find love.

Lex and Hudson have known each other for 15+ years. Hudson became her rock after the death of her fiancé. But they haven’t really thought of each other ‘that way’ before a drunken night that starts blurring lines together. I liked Lex and Hudson together, Lex obviously has baggage (rightly so!) with ‘serious’ relationships and is afraid, not only of losing her best friend but also losing him like she lost her fiancé. Hudson once he realised what he feels for Lex is all in.

Aly Martinez and M. Mabie did a great job establishing their friendship at the start, and also showing Jack with Lex and Hudson solidified how much they all love each other. Lex and Hudson especially after Lex’s brother gets engaged have been growing even closer. It’s pretty obvious to everyone but them, that they are meant to be. I liked their hassling each other and making bets, one bet that inevitably led to them realising that that they loved each other but they were ALSO IN LOVE with each other. They made a great couple, their banter was great, not only did they have fun together but being that close meant they could also be serious about stuff and give each the push when needed. You could clearly see how much care, want and love they had for each other.

Quibbles: I kinda hated it when Hudson called Lex, Kid. Which I’m not alone in since Lex hated it too especially after they’d slept together etc, it felt weird. Hudson’s emotions just felt a bit fickle to me. Also wasn’t a fan of Lauren and/or Mark. She seemed alright at the start and then I don’t know I guess falling in love with someone pretty quickly changed her. Which meant I didn’t enjoy the conflict with her at the end, especially because of how Lex responded. I felt like the drama was unneeded, especially following another conflict which I wasn’t a big fan of either. And along with minor quibbles which are definitely more due to personal taste meant. Perhaps I just pretty high expectations after reading When the Walls Come Down.

Regardless of all that, overall another great read by the duo! Looking forward to more from them. When the Time is Right is sweet, funny, mostly light hearted story of two big character personalities you root for to get their HEA.

I did everything I could to not make eye contact.

Actually, my MO for the past week had been no contact period, but that was a little hard to do when the guy you’re dodging knows things about you. Specifically, the lock code on your front door.

“You can go home, Hudson. I’m fine.” Out of my periphery, I watched him perch his hands on his hips.

So he had noticed my ghosting. I hoped he wasn’t as good at calling my bluff.

“What about what you said at the—”

“Yeah, I must have had a cold or something. Whatever it was, I’m over it.”

“Yep. Hey, how was your date?” My topic-swapping skills were on point. When he stopped, only an arm’s length away, I finally seized what scrap of pride I had and looked up into his blue eyes. “Are you seeing her again?”

“Me?” I dropped the spoon into the sink and put the ice cream down so I could cross my arms over my chest. “What do I have to do with it?”

His lids fell shut, and he tipped his head at the ceiling, stretched his neck from side to side, and then brought his gaze back to mine. “Kate seems to think that, maybe, I have a thing…for you.”

My face flushed hot, and I wondered if maybe I’d fallen down trying to get out of my leather skirt earlier and I was dreaming, passed out on my bedroom floor. The issue with that theory was I could smell him, feel the warmth from his body in front of me, and see his heartbeat thumping in the vein in his neck.

This was real, but I still wasn’t sure I could handle it.

“Well, that’s just, uh, dumb,” I contended weakly. Shaking my head to rattle myself back to sanity, I asked, “W-why did she say that?” I tried to laugh, but it was as fake as my gusto.

“Because, apparently, I talked about you the whole night.”

Okay, I was wrong. I’d thought riding in a car with him and seeing him shirtless and watching him play with Jack and seeing how much he loved my family and having him touch me and avoiding him all week had been torture.

This moment was a whole new level of torment.

“So?” I said childishly.

It didn’t matter how I felt or what I wanted. I couldn’t just leap into his arms and expect everything to turn out the way it was supposed to. That’s not how my life worked.

“So I need to find out if this, whatever’s been building between us, is something.”

Wouldn’t that be nice? Up until that very second, it had all been one-sided. I’d racked my brain all week to understand why I’d felt the crazy things I did about him.

“How you gonna do that?”

“We’re going to kiss,” he stated very matter-of-factly, and then he closed the distance between our bodies.

“We are?” I whispered. My voice had all but left the building.

“Unless you stop me right now.”

I didn’t want to.

But mostly, I wasn’t stopping him. 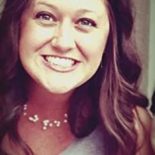 Mabie lives in Illinois with her husband. She writes everything from steamy romantic comedies to angst-filled, pull your hair out drama. She enjoys it all. With her unconventional love stories, she tries to embody “real-life romance.”

She cares about politics, but will not discuss them in public. She uses the same fork at every meal, watches Wayne’s World while cleaning, and lets her dog sleep on her head. She has always been a writer. In fact, she was born with a pen in her hand, which almost never happens. Almost.