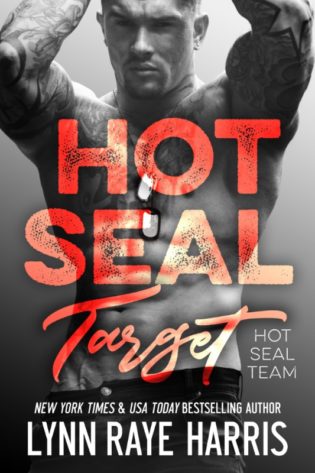 Navy SEAL Adam “Blade” Garrison’s assignment to infiltrate a tech billionaire’s criminal operations just got complicated. His cover: bodyguard for the man’s wife. His problem: Blade knows Quinn Halliday far too well. A sophisticated version of the chubby, shy girl Blade once knew, Quinn brings out all his protective instincts—as well as a few carnal ones that surprise him.
Quinn’s pride in having improved herself has turned bitter. She’s trapped in a relationship with a brutal man who views her as nothing more than a possession. Blade’s unexpected arrival makes her hope for more than a barren existence in a gilded prison. Until tragedy strikes, and Quinn realizes she’s next on the hit list.
Blade will do anything to shield Quinn from danger and keep her safe. But as they draw closer, an enemy works to flush them out. If he succeeds, he’ll put an end to Blade and Quinn’s budding happiness.
Unless Blade and his SEAL Team strike first…
**Stand Alone, No Cliffhangers, No Cheating, Happily Ever After Guaranteed!**

HOT SEAL Target is the sixth book in the HOT SEAL Team series Lynn Raye Harries and its the story of Adam Garrison aka Blade and Quinn Halliday.

I have and continue to really enjoy Lynn raye Harris HOT series and while I haven’t read the last 1-2 books in the HOT SEAL Team Series, these books are pretty much standalones so you don’t really need to read them in order.

Blade and Quinn met in high school, become best friends and stayed in touch through college but eventually lost when Blade joined the SEALS. It’s a quite a shock to find his childhood best friend not only married to someone who’s under suspicion of treason but also to see how much she has changed and might also be part of her husbands plan. Blade under  order poses as the bodyguard for Quinn to spy on her husband and to find out her involvement as well.

Blade and Quinn had a sweet and very passionate relationship. Quinn had a crush on Adam through high school and she was very sad to have her lost her best friend when they eventually lost contact. Blade for his part also really cared for Quinn but in a very best friend kind of way back then. He was very protective of her then and is now too. So this was sort of a friends to lovers romance or a reunion one if you will.

I really liked them together, I think they were cute together. The author did a good job in showing that Blade actually loved the woman she was instead of just being attracted to her body just because she was thinner now.

Quinn I really liked her, she had her insecurities and she had a goal when she was young which she achieved but it didn’t really change her personality. I liked the fact thy she did for herself instead of for someone else and it made ultimately feel a bit more happier with herself. She was still an introvert and shy but so sweet and wanting love. Which is what I guess led to her becoming with her husband. I think over the course of the book she become even stronger than already was.

I don’t know why but I just kept feeling like something was missing which I found later was the action and mission stuff that came in the later half of the book which made this so much better for me. I also enjoyed the bit of suspense of who actually was responsible for the murder in the book.

This one has less action than some of the other romantic suspense I’ve read by Lynne Raye Harris but this one is more focused on Blade and Quinns relationship and its overall a pretty good read.

I loved the cameos of the other members and of course Ian Black. When will Lynn Raye Harris stop teasing us and give us his book. I’m waiting impatiently!! The next book is Ryans Callahan or Dirty Harry as he’s called by the members which I’m really looked forward to reading.

If you haven’t checked out any of the Lynn Raye Harris romantic suspense I bid to start with the first book Hot Pursuit in HOT series, they are addictive !!

New York Times and USA Today bestselling author Lynn Raye Harris burst onto the scene when she won a writing contest held by Harlequin. A former finalist for the Romance Writers of America’s Golden Heart Award and the National Readers Choice Award, Lynn lives in Alabama with her handsome former military husband and two crazy cats. Lynn writes about hot military heroes, sizzling international billionaires, and the women who dare to tame them. Her books have been called “exceptional and emotional,” “intense,” and “sizzling.” To date, Lynn’s books have sold over 2 million copies worldwide.