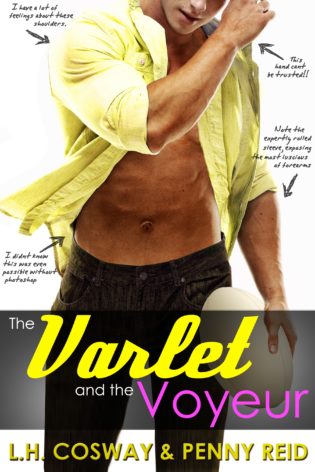 He kept his salacious secret for years. But soon, everyone is going to be reading about it in their morning paper…
THE VARLET (and the VOYEUR) William Moore is a long way from home. A farm boy from Oklahoma, he’s now the most well-respected member of the Irish rugby team. But appearances are often deceptive, and Will isn’t the clean-cut, all-American good-guy everyone imagines him to be. He’s got a secret, one that will tarnish his reputation forever.
THE VOYEUR (and the VARLET) Josey Kavanagh is a self-proclaimed mess, but she’s finally get her shi…uh, act together. She’s set her sights on becoming a veterinarian, but there’s one teeny tiny road bump. Her living arrangements are coming to an abrupt end, leaving Josey homeless and in need of a job to pay her way through college.
THE PLAN What he needs is a companion to keep him on the right path. What she needs is an apartment with free rent. Will is convinced Josey will make the perfect companion, since she’s brutally honest and basically ‘just one of the guys.’ Josey is convinced she can ensure Will doesn’t succumb to his voyeuristic proclivities by keeping a scrupulous eye on him. Except, what happens when the varlet is tempted by the voyeur, and vice-versa?! Perchance something very, very volatile. And vexing.
The Varlet and the Voyeur is a full-length romantic comedy novel, can be read as a standalone, and is the 4th (and last) book in the USA TODAY bestselling Rugby Series

I loved Penny Reid and L.H. Cosway individually and their books together. They write such beautifully unique couples, funny and lovely romance that you can’t help but adore. I was really excited to read the next book in their rugby (and sadly the last) while I did enjoy it, it wasn’t the love I felt for the earlier books in the series.

William Moore is the Oklahoma farm boy in the Irish rugby team, he’s quite and well liked. He’s a gentleman and compared to the rest of the team seems like the best mannered guy around. He has a secret which is him being a voyeur, something he has hidden from the public eye because of his profession.

Josey Kavanagh is still living with their parents, finding out about their financial troubles gives her push finally needed to stand on her own feet. Josey is an socially awkward, no filter from brain to mouth girl. She’s funny and lovely and now the babysitter to Will to stop his voyeuristic tendencies.

I enjoyed their friendship and you see them their development from strangers to friends to lovers and being in love. Their relationship was cute. I really liked Will, he was the one who made the book for me. He was just a nice guy that I wanted to see get his HEA.

Quibbles: Theres several things that I wished were done better….Firstly Will’s voyeurism its just never dealt with ?? It’s just a huge question mark left over after I finished the book? Its made out to this huge thing at the start of the book but by the end theres nothing ….Josey though her behaviour with Will, she would push in the friendszone as soon as they were done having sex but then she blamed him and it was just confusing because she pushed him away how was he supposed to know that she love him when her behaviour was to the contrary. I wish there was more development between them, because after they become lovers it just sort of halted.

I really wanted to love to this book, I feel like I’m in the minority though since my friend really enjoyed and loved the book so it’s more of a personal thing. The book still has that Penny Reid/LH cosway humour and uniqueness, it was just Josey made me question so many things about them as a couple.

Overall, I did enjoy the book, it has funny moments and some great scenes, the couple had great chemistry but as a whole I didn’t feel the love I usually do for the couple and duo’s book.

Enter the giveaway to win a amazing signed paperback bundle!