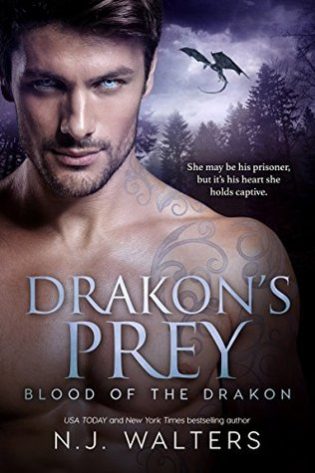 Drakon's Prey by N.J. Walters
Series: Blood of the Drakon #2
Published by Entangled: Select Otherworld on 24th April 2017
Buy on Amazon US, Buy on Amazon UK, Buy on Kobo, Buy on itunes

Valeriya Azarov turned her back on the family business to write and illustrate children’s books. But with a sister who leads the Knights of the Dragon, it’s impossible to get away from the secret society whose mission is to destroy and enslave dragons. When information falls into her hands along with the opportunity to save at least one of the ancient creatures, she can’t turn away any longer.
When a woman moves into the cabin above Tarrant Cooper’s secret underground lair, he’s both suspicious and intrigued. He hasn’t lasted four thousand years being careless, so when he suspects her of being a part of the Knights, the plan is to kidnap her and find out how much the organization knows about him and his brothers.
He’s drawn to Valeriya, but trusting her could get him killed. Even if she’s a pawn in the war between drakons and Knights, giving her his heart would mean forever.

More Dragonssss!!! This one picks from where we left in the last book with our protagonist going to find a Drakon (dragon shifter) to warn him about her sisters plan. This is kind of a hate to love story (mostly just on the heroes end). Let’s down to business…

Valeriya Azarov is an children’s books illustrator and has nothing to do with being a knight or her sister and her family’s business in capturing and torturing Darkons. Instead Valeriya even as a child imagined dragons as playmates rather than creatures that were to be hunted for their blood. Her books include dragons that are beloved by the children that read them. Valeriya goes to find the drakon her sister is intent on capturing, no more sitting on the side lines.

Tarrant Cooper is a wind dragon and has little love for knights especially one whose sister is the head of the operation. After losing one of his human friends in the last book due to the actions of the knights, Tarrant is angry and seeing Valeriya he decides to gain information from her to destroy the knights.

Tarrant is drawn to Valeriya from the moment he sees her, as is Valeriya fascinated by him. Tarrant is hesitant to trust her all the while he can’t help be attracted to her and his instincts tell him that she is innocent. I really liked them together, Valeriya was sweet and just a lovely character and Tarrant was quite protective of her which I really liked. They had chemistry right of the bat and we see them slowly falling in love. They were adorable!

This one also has a more threatening presence of the knights and we get see a bit more of the politics of their organization which increased the action factor of the book.

Quibbles:View Spoiler » I do wish that Tarrant hadn’t so much done so much stalking of Valeriya through the cameras, it just felt weird. « Hide Spoiler

Overall, I’m really enjoying this series and can’t wait for more. It just keeps getting better and better. Wonder which brother we will get next, the extremely social one or the quite one??

Once upon a time N.J. had the idea that she would like to quit her job at the bookstore, sell everything she owned, leave her hometown, and write romance novels in a place where no one knew her. And she did. Two years later, she went back to the bookstore and her hometown and settled in for another seven years.

N.J. has always been a voracious reader, and now she spends her days writing novels of her own. Vampires, werewolves, dragons, time-travelers, seductive handymen, and next-door neighbors with smoldering good looks—all vie for her attention. It’s a tough life, but someone’s got to live it.