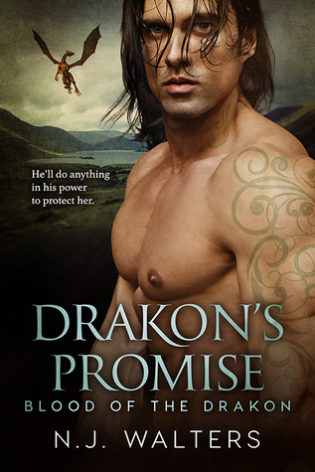 Darius Varkas is a drakon. He's neither human nor dragon.
He's both.
He's also the target of an ancient order who want to capture all drakons for their blood. When fresh, a drakon's blood can cure any illness and prolong a human's life, and the Knights will stop at nothing to get it.
When librarian Sarah Anderson stumbles across a rare book belonging to the Knights of the Dragon, she's quickly thrust into a dangerous world of secrets and shifters and things she never would have believed possible. When the Knights realize Sarah has a secret of her own, she becomes just as much a target as Darius. Her scary dragon shifter just might be her best chance at survival.

Who doesn’t love some dragon shifters! I’m always in search of books with dragon shifters so when I saw this, I knew I had to read it and since I have read some pnr books by N.J. walters previously I knew it would be good and it was.

I really liked the twist on the dragon lore, the crazy and creepy book and how drakon shifters came to be.

Sarah Anderson is a librarian who deals with antique books. Her gift of psychometry helps her date the books and find out if they are original copies. Working for her new employer, Sarah stumbles on potential criminal intent along with a book like an aura that she never encountered before. Sarah mostly ordinary life turns upside down when she meets Darius.

Darius Varkas is a drakon, a child of a human mother and his drgaon shifter father. In the past, Drakon’s were hunted and kept captive for their blood by the Knights, which not only keeps one young but also gives the individual some powers. However in the past few years everything has been relativity clam which promptly ends when Sarah discovers the Knight’s plot against Darius.

I really liked Darius and Sarah together. Sarah was great strong heroine, she wanted to help Darius warn him of his impending captivity when she ends up being taken along an adventure with Darius. I also really loved Sarah’s love for ancient books who wouldn’t want to be interested in knowing more about the old and fascinating books. Darius has heard about females who were destined to be mates of drakons but always thought them a myth however his and dragon’s reaction to Sarah makes him question the myth.

With sparking chemistry, budding connection, romance and caring between Sarah and Darius along with the slight suspense and threat of violence and impending danger from the Knights made it for a interesting read.

The world building was done pretty well and I’m hoping we get to see more development and history of the drakons and Knights. I also liked the lore of dragon’s, it was slightly different from other dragon shifter books as was why they ‘Knights’ hunted them.

I’m very interested to see how the other brothers;  stories play out and from the little chapter we got from Valeria’s POV it seems like she and Darius’s brother Tarrant would be getting the next book and since he currently happens to be a very unhappy and grieving drakon, it will make things certainly complicated and interesting.

This was a great start to a new series! Can’t wait to see what more N.J. Walters has in store for us. Bring on more dragons, I say!

P.S I did actually watch that dargon tales (the cartoon in the gif on the right) as a child and I loved it!

Once upon a time N.J. had the idea that she would like to quit her job at the bookstore, sell everything she owned, leave her hometown, and write romance novels in a place where no one knew her. And she did. Two years later, she went back to the bookstore and her hometown and settled in for another seven years.

N.J. has always been a voracious reader, and now she spends her days writing novels of her own. Vampires, werewolves, dragons, time-travelers, seductive handymen, and next-door neighbors with smoldering good looks—all vie for her attention. It’s a tough life, but someone’s got to live it.