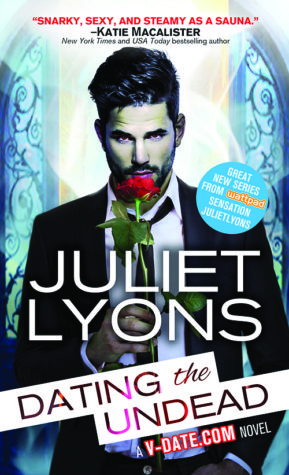 Dating The Undead by Juliet Lyons
Published by Sourcebooks Casablanca on May 2nd 2017
Pages: 352
Buy on Amazon US, Buy on Amazon UK, Buy on Kobo

Silver Harris is over clingy men—maybe men altogether. But when she shares a toe-curling kiss with a sexy Irish vampire on New Year's Eve, she wonders if maybe it's human men she's fed up with. Silver turns to the popular vampire dating site, V-Date, only to discover that vampire men are just as unimpressive as their mortal counterparts. And her mysterious hottie? He’s nowhere to be found.
Can’t a girl catch a break?
Logan Byrne can't get that sassy redhead—or that kiss!—out of his head. When his boss assigns him to spy on V-Date, he meets Silver again. Turns out, the police are recruiting humans to snitch on vampires through the dating site. As the snark and sparks fly, feelings between Silver and Logan deepen. But, when old demons resurface—literally—Logan isn't sure he can shield either of them from the dangers that have been lying in wait for centuries.

10 ways to tell if your date is actually a vampire

1. They only want to meet at night, using the excuse that they’re not ‘a morning person’.
2. On a date to the beach, you catch them harassing the lady in the mini mart to check the stock room for Hawaiian Tropics factor 500.
3. When you get a papercut, they’re oddly excited.
4. They’re still not over their ex. Even though the latter has been dead for two hundred years.
5. Every time you mention a church wedding they recoil in horror*.
6. They often refer to Eric from True Blood as someone who ‘has their shit together.’
7. They drink a lot of red wine, but never seem drunk. Wait—is that actually wine?
8. They have pale, flawless skin despite the fact you’ve never once seen them cleanse and/or moisturise.
9. When watching any kind of sporting event, they constantly scoff and sneer at the athletes. ‘Please! Is that the best they can do?’
10. They are particularly keen to remind you that the neck is a top five erogenous zone…
*Does not necessarily mean they are a vampire. Mortals—particularly males—are also prone to behaving in this way.

JULIET LYONS is a paranormal romance author from the UK. She holds a degree in Spanish and Latin American studies and works part-time in a local primary school where she spends far too much time discussing Harry Potter. Since joining global storytelling site Wattpad in 2014, her work has received millions of hits online and gained a legion of fans from all over the world. When she is not writing, Juliet enjoys reading and spending time with her family.