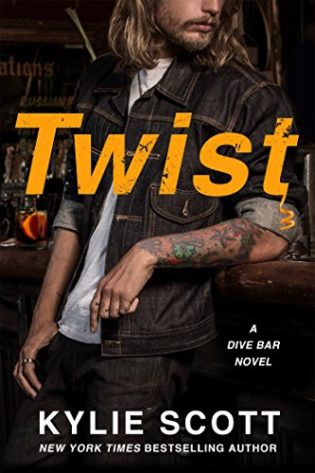 From New York Times bestselling author Kylie Scott comes the second sizzling stand-alone novel in the Dive Bar series!
When his younger brother loses interest in online dating, hot bearded bartender Joe Collins only intends to log into his account and shut it down. Until he reads about her.
Alex Parks is funny, fascinating, and pretty much everything he's been looking for in a woman—except that she lives across the country. Soon they're emailing up a storm and telling each other their deepest, darkest secrets...except the one that really matters.
When Alex pays Joe a surprise visit, however, they both discover that when it comes to love, it's always better with a twist.

I watched the streetlights cast shadows on the angle of his cheekbone, the furrow of his brow. Strange how his manly beauty had grown on me, redefining or rather stretching my usual boundaries. Perhaps some people’s allure came from the inside out. A good thing. Their ways and their words did the wooing instead of their physical appeal. Not to diss Joe’s impressive physique. As nice as a pretty face was, though, the personality, the person beneath the skin, should matter more. Anything else was pretty shallow and unlikely to last. Guess that was the difference between my scratching an itch with a stranger and the way this man had me tied up in knots. And not even neat, sea-worthy knots. I’m talking, haven’t washed or brushed your hair in forever
and there’s a big old mess back there. Shit.
At the bar, he’d flirted with me. Full-on flirted with me, his supposed platonic friend who was not his type. No way did I know what to do. Normally Valerie would be first on my hit list of people to call. But she’d just tell me to jump him, regardless of what else was going on, or any possible consequences. Plus, with him beside me it would be kind of uncool. But a couple of whisky sours or no, I was pretty certain I hadn’t imagined his interest. As Mom had always said, however, best to be sure.
“What are the renovating plans for tomorrow?” I asked.
“Rip out the old fittings and prepare the space for new.”

I nodded. “So we’ll be doing some pounding and screwing?”
“Ah, yeah.” The man cast me a look out of the corner of his
eye. “Sound okay?”
“Absolutely. Can’t wait to get my hands back on that big hard
hammer.”
“Great,” he said, throwing me another questioning look. I gave a nice bland smile. Yeah, pal. Two could play at the what-the-fuck-is-going-on flirting game. I turned in my seat, all the better to face him. “Did you want to bang, Joe?”
“What did you say?” Wide eyes flashed my way.
“Like I did on that wall today. That was fun,” I said with all due sincerity. “Will we be doing more of that?”
A pause. “Sure.”
“Awesome.”
Another quizzical look.
“Something wrong?” I inquired politely.
“No.” His Adam’s apple dipped as he swallowed hard, shifting in his seat, gaze decidedly unsure. The poor fool couldn’t begin to understand the crazy he’d unleashed with his little taunt. Get rough with the man? My starved libido was well beyond the rough-and-tumble stage. No more hiding or denying, sticking to the sidelines of life. It was my time to step forward and be brave. When it came to Joe Collins, I was more than ready to say yes.
“I just . . .” he started. “Never mind.” Neither of us spoke as he pulled into a parking space a short walk down from the hotel. I leaned over, placing my hand on his denim-covered thigh. The muscle tensed beneath my fingers. Shame on me for straying a little close to his loins.
“Thanks so much for tonight, Joe. I’m so glad we decided to be friends. Because you, sir, make a great friend.”
“Right. Good.” A frown. “How much did you have to drink again?”
“Not nearly enough. Quick, let’s get to my hotel room so I can have more!” I threw open my door.
“Okay.” Hands stuffed in his pockets, he followed me inside, lingering a step or two behind. Guess he didn’t like it when people’s moods got all mixed up and mercurial either. Funny, that.
I nodded to the dude at the front desk and pressed the button on the elevator. It opened immediately. Mirrors and old-timeylooking wooden framing decorated the small space. We both leaned against the back wall as it slowly ascended. “Yeah, sure can’t wait to do some banging, and pounding, and screwing around with you, Joe.” I smiled. “Sound good?”
He just gave me a dry look from his superior height. All confusion gone from his handsome face. Confined spaces only made him seem bigger, even more imposing than usual. No way, no day, however, was I crawling back into my shell or turning into a shadow. We’d agreed to work on our issues, so fine, I was putting it out there. Still, my bravado was fading, I could barely meet his eyes. The man affected me in all the ways.
“It’s hard, no pun intended this time, because sometimes it feels like you want to be just friends,” I said. “But then other times you flirt with me and I honestly don’t know what’s going on. No huge surprise there, I know. Social awkwardness is my jam. But I thought I mostly understood where you were coming from.”
A ding from the elevator and the doors opened at our stop. I walked out, his bearded hotness following slowly behind, stalking me almost. For certain his usual cool, easy-going-guy persona was missing in action. The man radiated tension, intensity, even. And if he didn’t, I definitely did. Inside the hotel room I went for mood lighting, only turning on the table and bedside lamps. I rubbed sweaty hands against the
sides of my pants. “What you said back at the bar about me getting rough with you, however. Now, that almost sounded like a dare.”
“Did it?”
“It did.”
Arms hanging loose at his sides, he just watched me, saying nothing. Jerk.
“So tell me.” I stood at the foot of the bed, facing him. Every
part of me was wired, wide awake. “What’s going on, Joe?”
His shoulders rose and fell on a deep breath. “I realized something
tonight.”
“What?”
“That I was falling into old habits. Doing what was easy instead of doing what I wanted.”
“Huh?”
“It was just before you spilled ice on that guy’s pants.”
“Sure. I can see how you’d be seduced by my smooth moves,” I said, voice filled with much doubt. My insides were ready to spontaneously combust. I swear I could feel sweat breaking out all over me, the man was just that hot. Also, my nerves were on high alert. One corner of his lips tipped up. “You know how you said you
weren’t jealous?”
“Yes?”
“Well, I was.”
Wow. I had nothing.
“This is the part where you’re supposed to admit you were jealous too,” he supplied.
“I didn’t think it needed to be said. I’m not that good a liar.”
“True,” he said. “Anyway, I made the pass at you and then I was leaving it up to you to figure out what you want. To be brave and make the next move.”
Softly, I laughed and shook my head. Men were such idiots.
“Make the first move? This isn’t a game. As I said last time the subject of sex came up, previous hurt feelings, etc. It’s going to get complicated.”
“Yeah, probably,” he said, voice deeper than I’d ever heard it.